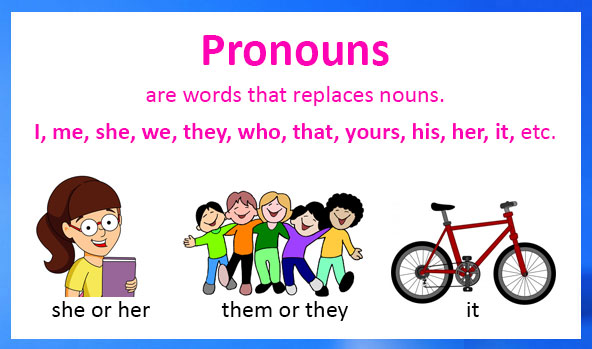 After nouns, pronouns is the next major grammatical category in the English language.

What is a pronoun? A pronoun is a word that takes the place of a noun. We use a pronoun so that a noun need not be repeated. For example,

Susie is a fashionable girl. She wears trendy clothes.

Of course, the first one. Using pronouns appropriately is absolutely necessary in speaking and writing grammatically correct English.

Examples of pronouns are you, I, he, she, it, we, they, anyone, everyone, himself, myself, nobody, yourself, who.

Let us do some exercises to see whether you have understood the concept of pronouns.

Identify the pronouns in the following sentences.

1. Mr. Lee bought a house after he had saved enough money.

2. Sally went back to her house.

3. The students who are taking the examination should wait here.

4. Mr. and Mrs. Kelly may not attend the party as they are on vacation right now.

5. I am angry with myself for screaming at you.

Did you identify the pronouns?

In the first sentence, he is the pronoun, since it is used in the place of Mr. Lee.

In the second sentence, her is the pronoun, since it is used in the place of Sally.

In the third sentence, who is the pronoun, since it is used to refer to the students.

In the fourth sentences, they are the pronoun, as it is used to refer to Mr. and Mrs. Kelly.

In the fifth sentence, myself is the pronoun, since it is used to refer to I.

There are many different types of pronouns. Below given are the subsections: