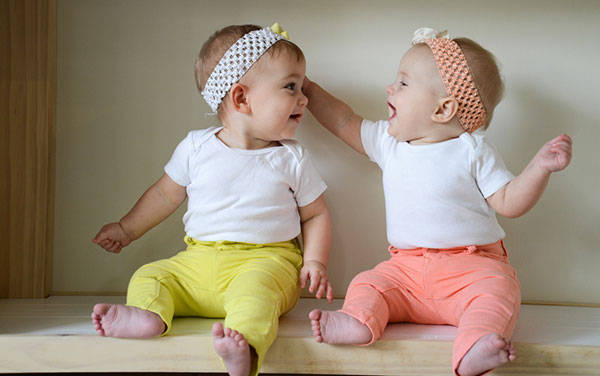 For thousands of years mankind has been fascinated by twins; and even today, when having four, five and even six children at a go is reported now and again, twins are still an intriguing pair. They draw in our attention and speculation on what exactly causes the phenomenon and what it means to be a twin in reality. Everybody at some point would have known or seen twins, these 20 interesting and fun facts about twins will surely surprise you!

1.We are mostly familiar with only identical and fraternal twins, but did you know that there are 7 different types of twins studied till now.
Types of twins are named identical, mixed chromosome twins, fraternal, mirror image twins, half-identical, superfecundation, and superfetation. We don’t hear much about the others because twins other than identical and fraternal occur quite rarely.

2.Around 22% of twins in the world are left handed, this is a huge number compared to the 10% of left handed people in the general population.
Left handedness isn’t studied to be a completely genetic trait, and the factors responsible for it are complex. Scientists have still not confirmed and are not sure how or why so many twins are left-handed. What they have found as of now is that it very likely has to do with a connection between a genetic predisposition for twinning and a genetic bias for left handedness. And why are the two connected is still a mystery.

3.Twins can have different birth dates; they need not be born on the same date.
In fact, twins can be born surprisingly far apart; so far that the longest recorded gap between the births of a set of twins is 85 days. So how does this even possible? We all know that simplest explanation of when one twin is born just before midnight and the other after. But 85 days is a really long gap and this happens when one of the babies is born early due to complications, while the other is left in the womb till the normal due date of the parent. This improves the survival rate and is much safer for the second baby.

5.Twin birth rates vary by geographic locations.
Scientists have come to believe that the tendency for multiple births in one locality is the product of various factors that involve fertility drugs, heredity, food choices, age etc. Some areas of the world have much higher rates of twin births than other places. For instance, the highest rate of twin births was recorded in Central Africa, with more than 18 twins per 1,000 births according to statistic reports.

6.Twins may also have two different fathers.
It is possible for a woman to give birth to twins who don't share the same father. This phenomenon is called heteropaternal superfecundation. This occurs when a woman releases multiple eggs, and the eggs are fertilized by sperm from two separate people. Though this is very uncommon genetic testing has shown that it is possible all the same.

7.About 25% of identical twins are actually mirror image twins.
What does mirror image twins mean? This means that the twins are identical, but they look just the way a reflection in a mirror is an identical an image of a person. For example, if one twin has a mole on the left cheek, the other will have it on the right cheek. Studies say that is due to the fertilized egg splitting later than the normal time for identical twin. This is around nine to twelve days after the egg is fertilized.

9.There is an Annual Twinning celebration at Twinsburg, Ohio, United States.
Twinsburg was actually found by twins Aaron and Moses Wilcox in the year 1817. This year the community of Twinsburg will officially celebrate its bicentennial with the slogan ‘Twins Days 2017—TwinCentennial’ announcing the heritage of twins. This city in Ohio to celebrates the Twins Days Festival in a sea of look-alikes that include not just twins but also triplets and multiples old and young from all over the world converge in Twinsburg to celebrate twins and being a twin.

10.Special diets to increase chances of having twins.
Research shows that what a woman ingests can help increase her chances of having twins. Genetics play a big role in influencing this phenomenon but some diets have also been found to help out. Diets rich in dairy and animal products are much more likely to assist in bearing twins than those that don't have them. This is due to a protein found in them named IGF which increase ovulation in women.

12.Twins usually develop a unique language between them.
Twins are often found to develop their own language and this phenomenon is called ‘cryptophasia’ or with the lesser known name ‘idioglossia’. Though this is really fascinating it is a relatively simple and easily understandable process which can be explained by the babies being able to do it with the large amount of time they spend with each other. When one of them models a disordered or incorrect speech of the other twin and keeps repeating the usage, this leads to both twins using the same grammatical or speech sound errors and creates a unique way of communicating between them. It sounds like a foreign language to the people around, but it is just a normal part of cognitive development just as humans have learnt to interact and talk to each other leading to forming a particular language.

13.Identical twins can be of different sexes.
Isn’t it strange that identical twins can be of different gender? But it is possible and it happens when the egg splitting process doesn’t go through as it should. This will in turn display genetic abnormalities in the children like the Klinefelter's syndrome. While one twin might have the right correlation of XX or XY the other has XXY.

14.Twins share a DNA but it isn’t identical.
We know that identical twins come almost always from the same sperm and egg, but their DNA isn't necessarily identical according to new studies. Differences in twins were believed to be due to environmental factors. But that isn’t the only force causing variations in genetics. Genetic studies have found that twins will move away from one another, with one carrying different or various copies of the same gene as the other.

15.The personality traits and interests of twins separated at birth and reunited after many years are often found to be eerily similar.
During the 60's and 70's, identical twins were separated at birth in an attempt to determine whether it was nature or nurture that determined their personalities but these studies were widely condemned as some of the worst and cruel ways of research in medical history. But the unethical study did demonstrate that a big part of who we are comes from our genes. Despite spending decades apart many of the twins subjected to the study bore striking similarities in their personality and preferences.

18.Difference in gestational age.
How is it possible for the gestational age to vary? The scientific explanation for this is that fertilization doesn’t have to happen at the same time for fraternal twins. Fraternal twins are born with the releasing of two eggs in the same cycle. These eggs can be released on different days within the same cycle and maybe fertilized days or even weeks after the first, which will lead to a difference in development between the babies, however slight this difference might be.

19.27 lbs and 12 oz is recorded as the heaviest combined birth weight of any set of twins in the world.
The normal weight of a single baby ready to be born is 14 pounds. If you think that is hard, imagine when two babies of this weight in a mother’s womb! That’s what happened in this case where the largest twin birth was noted. But this doesn't hold a dime to the largest singleton birth weight recorded - 23 pounds!