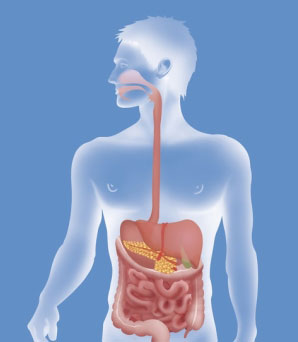 
Here we bring you some fascinating digestive system facts of the human body. The digestive system of not only humans, but also other animals will fascinate your kids. They will be intrigued on how it plays an important role and how our body breaks down the food, we eat. The processes of the digestive are many. It starts from the saliva to chewing food, and passing it through the esophagus to the stomach and the intestines.

Digestion is defined as the complex process of breaking the food we eat into nutrients. The body absorbs this food and uses it for energy, growth, and necessary cell restoration. The digestion process also involves creating waste that will be eliminated.

The two types of digestion are mechanical and the chemical digestion. The former is the breakdown of large pieces of food into tiny pieces by chewing or mastication. The latter, “chemical digestion” uses enzymes to break down this food further into smaller molecules which the body separates and the necessary ones absorbed.

Listed below is brief but a bit detailed information on the digestive system and other absorbing facts.

We are certain that you and your kids will love these facts about the digestive system.