Amazing Facts » Facts Of The Human Body Systems For Kids 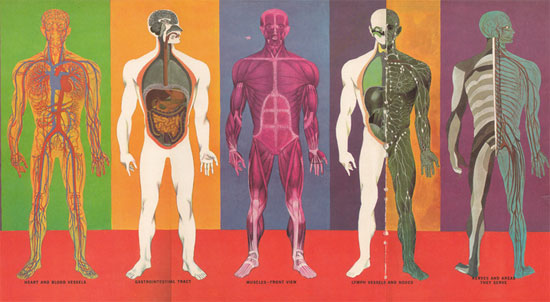 
Your body is constantly at work, doing over million things, 99 percent of which you don’t know, or are even aware of. Processes, such as carrying oxygen to various parts, digestion of food, and circulation of blood from head to toe are a few of the important ones. Check out these amazing and fun facts of the human body. Children will love these fun and amazing facts and will be able to easily learn and absorb them, while helping them learn about the human body.

Did you know that if the entire human blood vessel system were to be stretched out, it would circumnavigate the Earth two and a half times? In other words, it would be a distance of about sixty thousand miles. Furthermore, in a single day, the blood travels about twelve thousand miles around the human body. That in perspective is close to traveling half the distance of the Earth’s circumference.

The human hair is very strong. In fact, a single strand of human hair could hold 100 grams in weight. The human head contains anywhere between 100,000 to 150,000 strands of hair. Hence, theoretically, the combined hair of a whole head would be able to support 12,000 kilos or 12 tons. In other words, the weight of two elephants. If you were take it weight for weight, it is not as strong as steel, but more like aluminum or Kevlar, that is used for bulletproof vests.

The human bones make up close to fourteen percent of an average human’s weight. Despite that, they are strong as granite. To be specific, a block of bone, the size of a matchbox can support close to nine tons, which is four times more stronger than concrete.

The human muscle is actually far more powerful than what we perceive. Human strength is restricted to protecting our muscles and tendons from damaging themselves. This restriction can be eliminated during an adrenaline rush, and there are instances when some people have even lifted boulders or cars by themselves.

Another interesting fact – in addition to the basic five senses that consists of sight, sound, smell, taste, and feel, humans also have fifteen other senses. Some of these are balance, pain, temperature, in addition to internal senses for thirst, suffocation, and fullness. Interestingly, the body also has a sense for time, or the body clock.

Assuming that the human brain is a computer, it could perform close to thirty eight thousand-trillion operations per second. Blue Gene, the world's most powerful supercomputer can only manage 0.002% of that.

A few facts, which are sure to amaze you…

Did you know that the speed of nerve impulses traveling to and from the brain is about 250 miles per hour? In another words, faster than a Formula One Race Car.

Another interesting one – Did you know that when you blush, the linings of your stomach also blush.

Did you know that the human brain could read over thousand words per minute?

Were you aware that your belly button is virtually equivalent to a rainforest? To be specific, inside the belly button, there exists an ecosystem consisting of thousands of bacteria, the size of an entire rainforest.

It is a well-known fact that the humans are the best long-distance runners on the planet. During pre-historic times, we used to run after four-legged prey, until they died of exhaustion.

Within a time span of thirty minutes, the human body gives off sufficient heat that is enough to boil a gallon of water.

The muscles in your eyes move around hundred thousand times a day. Your legs in comparison would have to walk fifty miles regularly to receive the same amount of workout.

Another sad new for weight watchers - Every pound of muscle or fat gained, your body needs to create approximately seven miles of new blood vessels.

Humans are basically bioluminescent. In other words, we glow in the dark. The light that we emit is about thousand times weaker than our eyes is able to pick up.

Every human body contains about 0.2 milligrams of gold, most of it being in the bloodstream. However, you need the blood of around forty thousand people to make one eight-gram coin.

Some women are more receptive to more colors than others are. On an average, most people have three types of color receptors, while some women have four to five of these receptors. Thus, they have the facility to see a wider range of colors.

An important fact, crying alleviates stress. As a result, it decreases the feelings of sadness and anger. So once a while it is good to bawl and let these pent-up feelings out.

Visit us often for more such amazing and unique facts. Enjoy and we welcome your feedback.