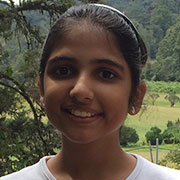 “Place of Wonders” by Anchita Kharbanda, is the Highly Commended story in the junior category of the second biannual International Short Story Contest 2017 which was organized by Kids World Fun.

Once upon a time, a boy named Pranshu lived with his family on the edge of the forest. His parents didn’t have a very high income, so they could not afford to live in the city. Due to his poverty, he did not have any friends, and every day after school, he would go to his favorite place in the jungle. There was a small waterfall, forming many small creeks, flowing endlessly to different parts of the jungle. Rocks glowed emerald green with algae growing on them. The water shimmered in the sunlight which reached it, trespassing through the heavily barricaded shelter of the skyscraper trees. Bushes laden with ruby red flowers, and birds singing melodious tunes, unparalleled to anything else. Even though the boy had no friends, he could find solace and inner peace.

Many years passed, and he kept going to the ‘Place of Wonders’, as he called it. Birds which were once strangers to him, now hymned tunes as he arrived. Squirrels which once hid in their castle of nuts, now waited for him on the fallen log. He was so isolated from everybody else that he learnt how to communicate with birds, sharing with them his day at school. He never felt alone, never was he lonely.

It was a normal day, and the boy was returning home after visiting his fellow animal friends. He went inside the house, intending to surprise his parents, like he always did, but what he heard stabbed him like a dagger. His father had lost his job, and they did not have enough supplies to last through winter. But the mother insisted on keeping this a secret from their son. They didn’t want to upset him or affect him in any way. He was hurt. Never ever in his wildest dreams did he imagine such a thing happening to his family. The next day, he came to the jungle from school, and he seemed as sad as a captain sinking with his ship. His face went as pale as dough, as the first drops of ocean blue tears left the protection of his eyes. He told his animal friends the problem his family was engulfed in, as his faced bent with overwhelming sadness. The birds decided to help him, giving him a simple idea of growing some much-needed supplies for the winter. With no idea what to do, he went near the waterfall, and started to clear a patch of land. With his animal friends, he plucked out all the plants and bushes growing on that plot. It took him a few days to get the plot ready to grow any fresh vegetation.

With nothing yet planted, he headed home wondering what to do the next day. He had no idea where he will get the seeds from and how he will plant them. When he returned to his friends the next day, he was greeted with a surprise, when the birds passed him some seeds and they insisted him on planting them. He blindly followed their instructions as they passed him more and more seeds. Finally, all the work was done. They had planted as many seeds as they could in that patch of land. Now there was nothing they could do but wait. As time passed, the boy watered the plants every day from the waterfall, morning and evening, and when he didn’t come, the birds used to take over his job. His jungle friends used to guard the patch of land in his absence. He was waiting anxiously for the day to come when the plot will be covered with colorful fruits and vegetables. Slowly seeds rose from depths beneath the ground and entered reality. Innocent looking green saplings grew to mature plants, bearing beautiful flowers. These flowers over time morphed into fruits and vegetables. He had not expected this even in his wildest dreams. The plot was laden with all sorts of exotic fruits and vegetables. He was overjoyed with happiness. Tears started rolling down his cheeks. He couldn’t thank his jungle friends enough. The next day he brought his parents to the forest, to the ‘Place of Wonders’. As they neared the arch that guarded the entrance, they were astonished to see a small patch of land springing with all sorts of fruits and vegetables. All their worries slowly started to fade away. They had grown more than enough supplies to last through the winter.