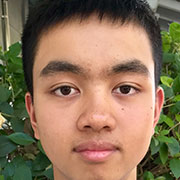 “Isaac’s Question” by Derek Chau, is the Highly Commended story in the senior category of the second biannual International Short Story Contest 2017 which was organized by Kids World Fun.

It was 7:30am when I entered the testing room, almost 2 hours before my first class began. I had only 6 hours of sleep, feeling resentful over the fact that I could’ve slept earlier had I not used my phone late at night. What I did with my phone was search for trivial details before I took my exam—I guess I took too long. “Isaac Gray, your test is on that desk,” the instructor informed me, “We’ll wait five more minutes for everyone to get ready,” he continued. I never knew the instructor’s name at the time, but that didn’t matter since all I wanted was a perfect score on the PSAT I was going to take.

The PSAT meant a lot to me since it was a step towards the SAT. Since my freshman year in Wilcox High School, I’ve started practicing for the arduous exam on Khan Academy. Every day I answered 50 SAT-related questions, believing that someday, I’ll get my desired goal of 1600 along with an essay score of 8/8/8. I thought, if I get a perfect score of 1520 on the PSAT, then I should be able to get a perfect score on the SAT. My claim, however, was contradicted once I realized that the former was a preliminary version of the SAT—meaning that it had fewer questions, including the absence of the essay portion. Nonetheless, I wanted to finish the PSAT with a perfect score.

“Ready? Begin,” the instructor said. From his go, I—along with everyone in the classroom—immediately read a passage called The Schartz-Metterklume Method, a short story written in 1911. After reading the story itself, I began to answer each of the questions, knowing that I’d done them all right. 60 minutes went by, and I had already finished the other passages such as a speech from Abraham Lincoln, a report regarding plant growth, an article summarizing the universe, and more. The questions were no challenge to me, since I completed practice exams in the past, each with scores promising enough to tell me, “You can do this Isaac, you’ll make your way to Stanford starting with this exam.” Upon hearing those words from my mind, my self-confidence grew to a level I’ve never experienced before! “Timer done!” the instructor announced, “We will now begin the Writing & Language section of your exam.”

Answering every question with ease, I passed the second section of the exam without difficulty. It was easy, as in the passage Transforming the American West Through Food and Hospitality a question stated, “The author considers deleting this sentence; Should the author make this decision?” I circled choice “A” which puts, “Yes, the author should make this deletion because the underline sentence is packed with loosely related information.” I expected this kind of question; it comes by in every sort of exercise I faced back in 10 Honors English. Within 20 minutes I answered every problem without trouble, being on my high horse.

The other students, on the other hand, were frantic: they flipped pages, filled circles, read passages, and looked around. I remember seeing Joel to my left, constantly looking at the instructor just to see if he could get an opportunity to cheat with his phone. Though the instructor told everyone to put their phones in their backpacks, Joel had placed his sister’s phone in his backpack instead, fooling the instructor. I don’t know how or why he did such a deed but, if he ever got caught, I wouldn’t have done anything to help him.

I remember meeting Joel back in 7th grade. He was a bully’s favorite for entertainment, especially when it was a lunch break for students then. I walked to him during lunch, and heard, “Please don’t hurt me!” a frightened Joel pleaded, I was only 12 years old then. “It’s okay, I’m here to help. Say, don’t I sit near you in Mr. Friedman’s class?” I asked kindly. We conversed with one another, talking about politics, whether a Republican or Democrat would win the White House; technology, whether the new iPhone 6 would change the market; and girls, Joel’s favorite subject he’d never stop talking about. It was from that point that Joel and I would become close friends.

“Our 10-minute break will start now!” the instructor said loudly. We could move around the class, free to stretch or relax however we wish. Of the many people in the classroom, Joel was the only one who didn’t get out of his seat. At the time, he was looking up the answers for his exam, hoping he could make up the time lost during the two previous sections. Walking to his desk at the classroom corner, I leaned towards his ear and whispered urgently, “Joel, what you’re doing isn’t right. You know better and I shouldn’t lecture you about cheating like a parent; It’s embarrassing!” “You’re going to have me caught if you talk to me like that!” He angrily whispered back, “C’mon, we’re making a big scene here.” Agitated, I replied, “Well let me make myself clear, if you get caught, I’m not going to save you and you know I can’t.” “Fine,” Joel answered. “Break is over, now it’s time for everyone to get back to their seats and begin the ‘Math’ section of their exam,” the instructor said, “Oh, and I almost forgot, there will be no calculator allowed of course,” he added.

I got through the first math section easily. I had put my training into practice, anticipating and dismissing every question as usual. Excitement filled my mind since I’d gone through three-fourths of the exam. I may have gotten carried away though since my friend Laura told me after the exam that I’d been smiling during the testing session. Once the entire classroom was finished with the first math section, we got to work on the final part: Math (Calculator allowed). “Alright class last one,” the instructor said, “It’s time to start the math section with calculator; good luck!”

Like the previous portion of the exam, I went through the questions easily—with little to no guessing. I didn’t have any trouble until I encountered the last problem, one which I’ve never seen during my training. The question states, “The pes, a Roman measure of length, is approximately equal to 11.65 inches. It is also equivalent to 16 smaller Roman units called digits. Based on these relationships, 75 Roman digits is equivalent to how many feet, to the nearest hundredth? (12 inches=1 foot).” Back then, I didn’t know how to answer the question, so I was forced to guess—a move I discouraged myself to make. Conflicted between two answers, I preferred choice “C”, which states 5.98 while leaning towards choice “A” which has an answer of 4. With only 2 minutes of testing left, my heart was racing, as if I were diffusing a bomb like the heroes in the movies. I was about to fill the dot on my answer sheet when suddenly, “THE ANSWER TO QUESTION 31 OF THE MATH: NO CALCULATOR SECTION, IS 4.55!” a robotic voice explained loudly.

Shortly afterward, the room was thrown into a panic. Students were turning their heads, laughing at each other, and worrying about the instructor’s next move. Amidst the chaos, I didn’t even make a guess but instead, looked for an answer choice that had the number 4.55. Just in the nick of time, I found and circled an answer which included 4.55, and it was choice “B”! “Settle down everybody! And who was the one that used a device in this classroom?” asked the instructor, whose ferocity had silenced the class. “It was me!” cried a voice coming from the left corner of the room. Looking at who it was (along with everyone else), I wasn’t surprised to know that it was my friend Joel who used his phone to look for an answer. “You’ve got a lot to learn young man; I’m going to ask you to leave this class immediately!” the instructor demanded. Tears in his eyes, Joel did what he was told, and ran out of the classroom. “Well class, time is up! I hope you’ve completed this exam and I wish for the best out of your scores,” the instructor said.

From this point forward, a year has passed. I’m in my junior year, thinking about what happened long ago; my friendship between Joel has been marred ever since.

I feel resentful that Joel didn’t complete his PSAT (his results were denied for cheating). However, I should’ve thanked him since he was the reason why my PSAT score stands at 1520/1520.