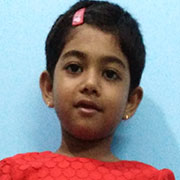 “How the Coconut tree got lines on its trunk” by Adrika Ghosh, is the Highly Commended story in the sub-junior category of the second biannual International Short Story Contest 2017 which was organized by Kids World Fun.

How the Coconut tree got lines on its trunk

Many years ago, to be more specific in the ancient age, Coconut trees used to be a kind of herb. One day, all the trees in the jungle planned to have a party. When the Coconut herb heard about the party, he was so much interested to join. But unfortunately, it was not so easy; it was the party for the Trees. So as an herb he will not be invited. Not only that, no tree will allow him to enter the party. But the coconut herb was desperate to join the party by any means. He didn’t want to lose the chance to have good food & beverages served at the party. So he made a trick. He thought, “I’ll put some buns around my stem, so I’ll look like a tree and no-one will recognize me as an herb.” Just then he thought again, “Oh! What can be my name? Why not? If somebody asks, I’ll tell that I’m the ‘Coconut tree’.”

So, that night he stole some buns from a bakery farm and put them around his stem. He thought, “Oh! Now I really look like a tree. Nobody will recognize me as herb; the trees will think that I am also one of them.” The next day he attended the party with the disguise of a tree. But alas! He was caught. The old & experienced trees sorted his disguise within a minute. They all were very angry as they saw the new looking ‘Coconut tree’ which was originally the ‘Coconut herb’. The strong trees ran to beat him, but the old Banyan Tree stopped them. He told,” Why to spoil the party because of this idiot? Let’s throw him out & continue.” Then all the trees threw him away and as they did so all the buns spilt helter-skelter.

A tailor was passing by that area. He saw this mess and felt pity. He stitched the buns to the herb. Lo! it became Coconut tree. The tailor had also painted him brown as the buns were yellow. And the stiches over the buns and stem are the lines of today’s trunk. Thus the dream of the coconut herb was fulfilled. He really transformed into a tree.