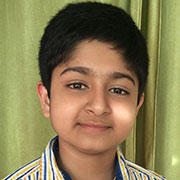 “Ghosts don’t have Legs” by Adyut Dangwal, is the Highly Commended story in the junior category of the second biannual International Short Story Contest 2017 which was organized by Kids World Fun.

“We are sick and tired of these thieves,” I said.

“True, they have even robbed IKIKI bank,” replied Ravi.

“I wonder why the police are not able to nab them. I even heard that the Flying Squad is on their trail,” said the fattest of the lot, Rohan.

“I’ve heard that they are very clever. No one knows where their hideout is,” piped in Anjali.

“Leave it. Not our headache. So what are the plans for the weekend?” I asked.

“I don’t know. Maybe we could go to that deserted mansion on Snake Road. I have always wanted to see it,” suggested Ravi.

“Are you out of your mind? That house, correction, estate is haunted,” said Anjali. “The milkman once told my mom that he had heard strange sounds coming from there and one of his cows that had been grazing there went missing!”

“O’ someone is scared of ghosts!” said Rohan making fun of Anjali.

“I’m not scared but there is no smoke without fire. I tell you people, there has to be some truth in it.”

“Then why not go there and find out for ourselves about your smoke and fire,” I said.

“It’s not funny I tell you,” Anjali added angrily.

“Okay guys, we are going there this evening and it is final.”

“This very evening???” Ravi sounded zapped, “Isn’t that too early?”

“Pack your bags. And don’t forget some snacks,” chuckled Rohan.

“So we meet at the park at sharp five,” I signed off.

I reached the playground exactly at five. Ravi and Anjali were already waiting.

“Hey! Where is Rohan?” asked Ravi.

“That fatso must be sweating off a few pounds, his house is very far you see!”

We all laughed. Rohan’s house was the closest, just round the corner.

We walked to the mansion. Just stepping inside gave me goosebumps. It was so creepy. Ravi seemed to be the bravest. He was leading from the front. I think I could see Anjali shivering. She was probably recalling the milkman’s story. Rohan was busy finishing off the second packet of chips. He couldn’t be bothered about anything but the eats.

“Hey Rohan, in case you are not able to run for your life when Anjali’s so-called ghost runs behind you, do not blame the chips I had got for myself,” I said staring at him.

We walked in. The house smelt of tobacco and barbecued chicken.

“Your ghosts are non-vegetarians Anjali,” I quipped.

“So you better beware of them then,” Anjali retorted.

“We needn’t worry. The ghost will go for Rohan first. So we will at least have a five second head start.”

All three of us burst out laughing.

I turned around. It had to be Rohan. “Even after gobbling all my chips! You are a tough competition for the ghost Rohan,” I added. “Now stop poking me. I have nothing left in my bag.”

“What the….” I said looking behind and there I saw this huge figure draped in white and holding a candelabra right behind Rohan.

“Aaaaaaaagggghhhh” I screamed and all the others, who turned as well, joined in the chorus.

We all ran, correction, stomped up the stairs. The ghost is right on our tail. Anjali ran fastest screaming all the while,” I told you, I told you!”

Rohan ran cursing the packets of chips. He kept banging into things and I had to pull him along. Even Ravi had to push him from behind. Just about then Anjali spotted an open door and ran into a room. Ravi followed suit.

The ‘fatso’ being ‘The Fatso’ was of course not able to run fast.

“Shut up! And run for your life,” he shouted.

“This is no time to pull your shirt up…” I said as I pulled another of my poor jokes.

Just then the floor gave away. And we both crashed on to the ground.

“That was an unexpected way of coming down,” said Rohan.

Ravi and Anjali were right in front of us.

“She needs to tell you people something,” said Ravi.

The whole thing was clear now. Rohan who had a phone of his own (lucky him!) called the police. And like every other story the thieves were nabbed.

“But how did you know?” asked the Superintendent.

“Oh you see,” said Anjali, “When we went into the room I noticed that the ghost who was running behind these two boys here had two hairy legs and I thought that ‘ghosts don’t have legs’ and even if they do, I bet they don’t have hair on them!”