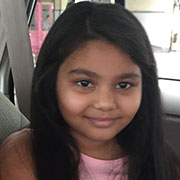 “Brute” by Aliya Shetty Oza, is the Highly Commended story in the sub-junior category of the second biannual International Short Story Contest 2017 which was organized by Kids World Fun.

Once in a bright and green forest, there lived a mean, shallow and selfish rhinoceros named Brute. He had a greyish white body and was nicknamed Brute as he enjoyed terrorizing the other animals.

Brute was rude and arrogant; he challenged other animals living in the woods to fight him. He first started picking on the smaller and leaner animals like the deer, antelopes and zebras. Each animal tried to fight him but lost. The more animals he defeated the more conceited and overconfident he became of his vigor.

One fine day, Brute felt so evil and full of himself that he went to confront the old and noble King of the jungle, the Lion. He arrogantly defied the King, "The jungle needs a strong King, not a weakling like you. I challenge you to fight me if you aren't too scared you loser." The King had no choice but to agree. The news spread like wild fire through out the jungle.

Finally the day came when the fight was to take place. Before the combat began the King prayed to God saying, "I am too old and feeble to battle. Please, please help me."

At that very moment the Queen Ant that lived in the lion's cave approached the King saying, "We ants work together, we are strong together and we can beat Brute together. United we stand and divided we fall."

The King laughed. He exclaimed, "You are so small and tiny. How can you dream of beating a mighty creature like the rhinoceros? It is really impossible!!!" The Queen Ant just said, "You wait and watch." The King and the Queen Ant went their separate ways. The Queen Ant lined up her army of ants.

Finally it was time for the fight. Brute did a little warm up to show off his power. As he was thudding his legs, the ants slowly but steady climbed up his back and crept into his ears. The ants drove Brute mad by marching on his eardrums. Until Brute finally cried, "I give up."

The Queen Ant went back to the King and asked him, "Is it really impossible?" The King shook his head and giggled. Brute ran away and was never to be seen or heard of again.

From that day the Jungle had a special song for all the animals and this is how it goes:

There was a rhino named Brute,
He was not very cute.
He picked on small animals like antelopes, zebras and deer,
As it was his career

He felt so strong,
And so he did something very wrong.
Brute challenged the Lion King,
To a fight in the boxing ring…

The old and feeble King prayed to God,
As he kept on chanting O Lord!!!
Suddenly the Queen Ant appeared,
After saying a few words she disappeared.

A group of ants marched up Brute's back,
With the idea of giving him a whack!!!
The other ants drummed in his ear,
To instill fear!

The ants drove him mad,
And then the jungle was never sad.
From that day the animals recall,
United we stand divided we fall.

Moral: There is strength in unity that can defeat even the mightiest.