Short Stories » The Tale Of The Rabbit And The Thief 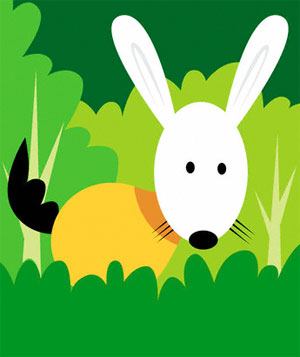 The Tale Of The Rabbit And The Thief


Long time ago, the rabbit was regarded as a big hunter. He lived with his grandma in a cabin somewhere in the woods. It was winter and just like other hunters, the rabbit set traps and snares to catch other animals for food. He got number of such small animals and birds through his well-laid snares.

However, one day he realized that someone was stealing the animals from his traps. Every morning at the crack of dawn, he went to check his traps, and he found them empty. Soon the rabbit and his grandma became ravenous due to lack of food.

The rabbit then laid a cunning trap with a bowstring, and he was sure that he would catch the thief. He kept one end of the string and hid behind the bushes, so that he could watch if any animal was caught in his traps. There was a full moon when he set the trap up. Suddenly, the moon disappeared and everything became dark. There were a couple of stars that were sparkling and there was no mist in the sky. The rabbit began to ponder what had happened to the moon.

The rabbit then saw something move stealthily through the trees, and was suddenly blinded by a flash of brilliant white light. The light went straight to the trap that he had set. At once, the rabbit tugged on the end of the bowstring and tried to tighten the noose. There was a struggle and the rabbit immediately knew that he had caught the thief.

The rabbit quickly fastened the bowstring to a nearby tree and rushed home. He wanted to tell his grandma what had happened.

The grandma, a wise old rabbit, told him, “Rush back immediately, and find out who you have captured.”

The rabbit said, “Now that I have caught the thief, I shall wait till daylight before returning.”

However, his grandma cautioned him and said, “It might be too late by then, so return now.”

So the rabbit returned to his trap to find out who the thief was.

However, when he reached his trap, the rabbit saw that the bright light was still present. The light was so bright that it hurt his eyes. Therefore, he went to the nearby brook to wash his eyes and cool them. The he made huge snowballs and threw it at the light to put it out. However, no sooner, it hit the light, they fizzled out. Next, the rabbit took some dirt from the stream and made some mud balls. Then he threw these mud balls with all his strength at the bright light. He was a decent shot and as soon as it hit the light, his prisoner yelled.

At that point, a strange and unusual voice inquired, “Why am I trapped and subjected to this humiliation. I demand that I be set free at once. I am the man from the moon and must be home before daylight.”

The rabbit went closer and noticed that his prisoner’s face had been dirtied with all the mud balls that the rabbit threw at him.

“I shall kill you and the entire rabbit tribe, if I am not set free,” threatened the moon.

The rabbit was terrified to the point that he rushed back to inform his grandma about his strange and interesting prisoner. Although a wise, old rabbit, she too got afraid when she heard her grandson’s tale.

She advised her grandson, “Go quickly to the spot and release your prisoner at once, or all the rabbits will be in danger.”

The rabbit returned, and told the moon man, “I will set you free, but there is one condition.”

The moon man was angry, yet asked the rabbit, “Tell me what you want, you silly animal.”

The rabbit told the moon-man, “Promise me that you shall never return and steal from my traps.”

“There is one more precondition,” said the rabbit.

“Be quick with it, you stupid animal,” said the moon-man.

“Promise me that you will never return to earth,” asked the rabbit.

The moon-man agreed to both the conditions.

The rabbit could scarcely see in the amazing light, in spite of which he somehow chewed through the bowstring and set the moon-man free. The moon soon disappeared, leaving a flash of light behind him.

The bright light had almost blinded the rabbit and his shoulders were severely singed. Even today, rabbit’s eyes flicker as if the light is too strong for their eyes. Their eyelids are pink, and their eyes water if they stare at a bright light for some time. Their lips and nose jerk, recounting the rabbit's dread.

However, when the moon man returns, one can see that he has never possessed the capacity to clean the mud marks from his sparkling face.

« Back to MenuNext Story: A Wicked Man and A Kind Bear »