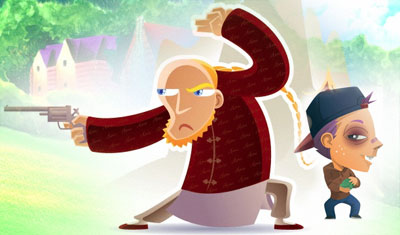 You must be already familiar with naughty Sonu by now. If you know him, skip this passage and continue to read about the funny stories featuring Sonu! If not, let us meet Sonu!

Sonu is a sweet, innocent but a naughty 10-year-old boy. He is mischievous, funny, and very smart. People tend to be careful with him as he outsmarts them easily. Sonu is the typical kid; he could be your kid, your neighbor’s kid, a relative, or just about any kid. Read on to find more about Sonu’s theatricals, tricks, and acts of innocence.

This is a story that highlights a hunting experience of Sonu, which will have your kids rocking with laughter. Don’t miss it and visit us to read more interesting funny stories for kids.

Two Targets in One Shot

Sonu’s father used to go for hunting occasionally. A long drive, followed by hunting for about few minutes always attracted Sonu. The reason was Sonu’s father used to boast about his hunting prowess and good stories. Often, he would return home carrying a bird or a rabbit.

One day, his father was preparing for a hunt. Sonu was very keen to go with him. He asked his father to take him along, as he was bored at home. His father took Sonu with him to the hunt.

They drove a long way before they reached a lake. It was a big lake surrounded by many animals. Birds, monkeys, rabbits, and other tiny animals were sheltered by the lake. Sonu’s father was trying to hit a rabbit, but couldn’t do it. He tried many times, but could not even hit a single animal. Sonu became more bored more than he was at home. He asked his father to quit so that they could get back home.

They drove back home. Sonu’s mother was surprised to see them return so soon after hunting. When they returned, there were few guests waiting for them at home. They asked them what they got in their hunting trip. As Sonu didn’t want to damage the self-image of his father, he decided to take matters into his hands.

Sonu replied, ‘Mommy do you know that Dad is a great hunter! He hunted two targets at the same time!’

His father remained silent. His mother became curious to know. Sonu then added, ‘Mom he shot at the head and toe of the duck simultaneously!’

Even the father was surprised to hear it as so were their guests.

One guest happened to ask Sonu, ‘Where is the duck? Shooting at the head and toe together is not possible.’

Sonu broke the surprise, ‘The duck was scratching the toe with its head near the lake. My dad shot at the duck’s head. Therefore, it hit the head as well as toe and the duck fell in the water! That’s two targets in one shot!’

It left everyone speechless, even Sonu’s father.

« Back to MenuNext Story: The Minister And The Dogs »