Short Stories » The Clever Jackal And The Foolish Donkey 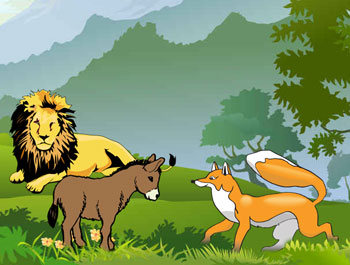 The Clever Jackal And The Foolish Donkey


This is a short bedtime story of an aged lion who had a clever jackal for a servant. The jackal was also a bit old and he was only happy to be the lion’s servant. Whenever the lion killed an animal, he would first have his fill and leave the rest for the wily jackal.

It so happened that one day the lion was very hungry and attacked a huge king elephant. The tusker got angry and injured the lion so bad that he could barely walk. Since the lion could not hunt, both, the jackal were starving. The lion asked the jackal to use his wile to try and trap some animal.

The lion told the jackal, "Use your wile and bring me an unsuspecting animal that I could kill without much effort. Otherwise we would die starving.”

The clever jackal thought for a while and came up with an idea. He slowly got up to search for an unsuspecting animal. He came across many animals, but it was obvious that his master, the lion, would be unable to kill them. They were either too fast and some of them were even stronger than his master, in his present condition.

Finally, he saw a donkey grazing by the side of the river. The river was almost arid and the grass was mostly dry. It was evident the donkey was hungry.

The wily jackal was thrilled. He thought, “This jack is precisely the animal that I need.”

He quietly walked toward the donkey and greeted him. He said, “Dear Sir, you look tired and worried. Is there anything wrong? Can I help you in any way?”

The donkey replied, “I am hungry and have not eaten for a few days.”

The wily jackal quickly sympathized with him and said, “Oh, that’s terrible. Why don’t you come with me to the forest? The grass is green and there is a river next to my cave. You also don’t have to worry about any wild animals, because my cave is far from where the wild animals live. Besides, the smaller animals that live besides the river are very friendly.”

The foolish donkey thought for a while and looked a bit apprehensive.

The wily jackal cautiously said, “Your master will not find our place. There are also many animals of your kind living there. There are she-donkeys (jenny’s) there, who haven’t seen a male donkey (jack).”

The lovesick jack immediately said, “Come on, I have heard enough. Lead me to your place and let me meet my new friends.”

Together they left for the hungry lion’s den. The lion saw them approaching and was happy that he had a clever jackal for a servant. As a result, the moment they reached close to the den, the hungry lion leaped at the donkey. The lion, out of haste missed his target, landed on some rocks, and further hurt himself. The terrified donkey took to his heels.

The jackal was angry and swore at the lion, “Impatient fool, couldn’t he have waited a bit longer?”

However, the lion replied regretfully, “I was so hungry that I got desperate. I did not expect that you would return so quickly. I apologize.”

The jackal shouted at the lion, “You couldn’t kill a foolish donkey. How did you ever think of attacking a king elephant?”

“Not to worry, I will bring him back, but be prepared this time”, said the wily jackal.

The lion was shocked, and said, “How are you going to bring him back? He would have reached his home by now.”

The jackal said, “Leave that to me and don’t act hasty.” He then left in search of the donkey.

He found him, next to the river drinking. He was still breathing hard as he left the place so fast.

He said, “You are nothing but a scheming, wily jackal. If I had not bent down, I would have been dead by now.”

“What are you laughing at? Asked the donkey.

The jackal curbed his laughter and said, “My dear sir, that was a she-donkey. She has been lovesick for some time now. She could not believe, when she saw you walking up the hill, and wanted you for herself. She sprang to hug you, but you fled.”

I told her that you were a shy person and she should not have acted in haste. The foolish donkey could not believe what he just heard.

“Come on, let’s not waste any time. They are all waiting for you,” said the wily jackal.

"Alright, if you say so. Lead the way, brother jackal", said the donkey.

The lion was shocked to see the clever jackal and the foolish donkey return. However, this time, the lion did not make any mistake. He waited until the donkey reached his cave and quickly finished him.

The lion then went to freshen up before his meal and asked the jackal to keep watch. The clever jackal was ravenous and had other plans. He quickly ate the heart and ears of the donkey, before the lion returned.

The lion returned and was furious to note that the best parts were missing. He shouted at the jackal, “Where are the other parts. Who ate them, while I was away?”

The jackal remained calm and said, “Do you thing that this foolish donkey had these parts. If he had them, do you think he would have ever returned?”

The lion did not bother to further question the clever jackal, as he was ravenous, and quickly began eating.

Moral: If you can hold your head in the face of disasters, then you would be able to defeat them.

« Back to MenuNext Story: The Tale Of The Rabbit And The Thief »