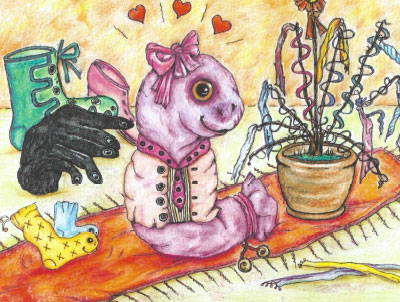 With the weather turning colder, and the days getting shorter, Sock was badly in need of a warm coat to wear for the winter.

The Sock Babies were always running around and getting up to mischief.

Because they never sat still long enough to feel the cold, they didn’t need coats!

Or ribbons either, for that matter.

Slippers were warm and furry.

Sock had wanted to cuddle up and keep warm in them many a time, but they had always said no!

As for TwinTwin, she already had a nice red jacket, which made Sock slightly jealous, especially as she refused to share it with her.

And Shoe Sweetheart was lined inside with pink velvet!

Even worse was that the pocket money box where the Sock babies kept all their savings, was empty. All the money had been spent on buttons and bows, and the weekly membership fees for the Sock Club had not even been paid!

There was a bag of dolls’ clothing in the nursery, which was how TwinTwin had become the proud owner of her coat, but that was stealing, and Sock certainly didn’t steal – did she?

Months ago, Sock had been in the back garden, and found an old plant pot, in which she had buried an old, worn ribbon. Now there was a ribbon tree in that pot, with lots of different coloured ribbons growing inside!

If she could talk TwinTwin into washing her coat, maybe Sock could “borrow” it from the washing machine, and plant that too.

The little fellow became very upset. No longer was she the life and soul of the party. This did not go un-noticed. Socks sulk if they don’t get their own way.

The first to notice this was Glove. “What’s wrong now?” asked her five-fingered friend.

“I’ve got no real friends and no winter coat “ replied Sock. “It’s not fair!”

And she burst into tears.

The Sock Babies heard this, and started giggling loudly. This just made Sock cry even harder.

“Let’s go and visit the ribbon tree!” said Glove, and held out a finger in friendship. “That should cheer you up. You don’t know what you might find there, after all!”

What Sock didn’t know, was that Glove had secretly been adding ribbons to the plant pot, at first meaning it to be a surprise for when Christmas came.

But, this time, Glove was happy to let Sock think that she had “grown” them herself,

and that she had “green fingers”, as all good gardeners do! And Socks!

Meanwhile, the Sock Babies had found a bright pink jacket for Sock in the nursery.

They all had plenty of clothes anyway – and a big house all of their very own!

Sock stared at the ribbon tree. Suddenly, she felt so proud that she almost forgave TwinTwin for being selfish. There were so many different ribbons on the little tree that it was very hard to choose one to take home! And she nearly forgot about wanting a new coat!

Unfortunately, this made the whole ribbon tree crash to the ground, and the plant pot was broken in half! Such a dumsy Sock!

Uncle Doc Marten appeared. He was pushing something pink with buttons on it along the path towards Glove,

The Sock Babies followed closely behind. “Did you forget something?” asked Glove.

“Ooh!” Sock had been so upset lately, that she had!

Glove picked up the coat which Uncle Doc Marten passed over to her.

“Bright pink, full of buttons, and your size as well” said Glove.

This was all too much for the little sock.

It had been a long day.

And now she had broken the ribbon tree.

And now it was starting to rain.

And now she had forgotten her own birthday!

“It’s the wrong colour!” she cried, and burst into tears - again!

« Back to MenuNext Story: Shoe Runs the Marathon »