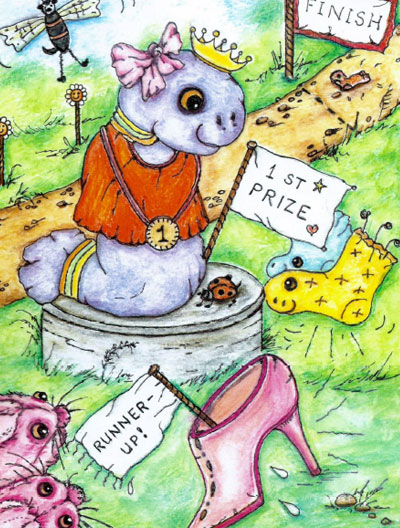 Sock was happy! She was getting the family ready for bed, and the Sock Babies were behaving themselves for a change. The Shoebox was made, Uncle Doc Marten was laying sleeping by the front door, and Slippers were in the cupboard under the stairs.

Unfortunately, TwinTwin was outside, hanging on the line in the garden.

She had been washed.

As Sock was about to put the Sock Babies inside the Shoebox, she heard a loud advert coming from the TV in the next room. It was asking for people to run a mini-marathon and raise lots of money for their favourite charity.

“You could raise our pocket money for our favourite new ribbons!” the Babies cried.

As they were only given five pence each week, which always went in ‘Socks’ pocket money box’, they had a good point !

“Well we could always GIVE your extra pocket money to our own charity!” replied the crafty Sock, with a glint in her eye. “And we could run twice around the garden, with Ladybird giving out a prize to the winner!”

“What kind of prize?” Shoe Sweetheart had woken up now, and was excited. It had taken months to practise running with her high heel! And weeks to even walk!

“How about a gold crown and a chocolate medal?” suggested Sock.

There were gold paper hats left over from last Christmas, and chocolate coins kept in the fridge - for special occasions, of course!

“Do you think Uncle Doc Marten and Slippers will join in? asked Shoe.

“No!” replied Sock. “Boots can’t run, and the Slippers are too vain. They’re scared it might rain!”

“Well, what’s the point of a race with no-one to run in it? asked Shoe.

“Because me, you, and the Sock Babies will do it!” replied Sock. “That is, if they want more pocket money!”

This was quickly agreed upon, and it was also suggested that, apart from everyone needing a day out, bright pink ribbons would be worn by all, and all the odd socks would come to watch from the Sock Club, IF they could escape from the evil clutches of ‘washing machine!’ And, on the condition that they, too, wore their pink ribbons – no other colour would do.

Next day, everyone went outside into the garden. Slippers smiled at each other.

It HAD been raining!

Only three members of the Sock Club had turned up. One of them was called Stripes, and he didn’t like Sock at all!

“I only came to see you lose!” he said nastily. Oh dear!

Sock smiled. As usual, she had a plan. “Once around the garden, and the first to pass the finish line is the winner!” declared TwinTwin, who had been taken down off the washing line, to keep a close eye on the race.

The Sock Babies, Shoe Sweetheart and Sock stoold lined up ready to set off.

“Go!” screamed TwinTwin and off they went.

“I thought it was meant to be TWICE round the garden?!” said Big Boot, not really caring either way. It started to rain heavily.

Ladybird looked worried as she saw the Sock Babies shuffling around in the long grass, when they were supposed to be on the garden path. Shoe was in the lead, and Sock was quite a long way behind.

All of a sudden, Shoe started to wobble, then fell over on to the grass!

“Shoe overboard!” shouted TwinTwin, and rushed over to help.

Meanwhile, Sock had caught up. While TwinTwin and Slippers were helping poor Shoe, Sock happily shuffled past, and arrived at the finishing line with a big smile, and hiding a naughty secret as well.

The Sock Babies, Shoe, Slippers, Boots and Stripes all had to watch, sadly, as Sock was crowned the winner, and presented with the gold paper crown and chocolate medal from Ladybird. However, nobody was pleased.

Shoe had wobbled and fallen because her heel had come off. But why had that happened? “You are a true winner.” said Shoe Sweetheart, feeling brave. She now faced having her heel mended – by Hammer.

The night before the race, when Shoe had been sleeping, naughty Sock had crept up to her and loosened her heel with help from Kitchen Pliers who had agreed not to say anything in return for helping to clean out their Tool box.

As Sock watched Shoe being carried away to face Hammer, with her poor heel dangling beside her, she suddenly felt very guilty, and very sorry.

Sock wins again!” she cried. And pulled off her pink ribbon.

« Back to MenuNext Story: Sock Learns to Drive! »