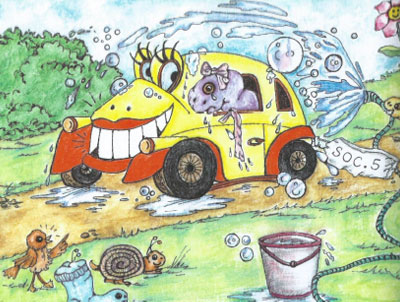 As poor Shoe was recovering from losing her heel, Sock, still feeling guilty for cheating, decided to do something to make it up to the little fellow. But how?

After all, it had been a cruel trick to play, and now poor Shoe was left with a wonky heel, and feeling very upset indeed. Naughty Sock !

The day before, a new toy car had been delivered to the house. Uncle Doc Marten had been sitting quietly by the front door when it had arrived in a box.

This car would complete the collection of toy cars which were kept in a glass cabinet in the front room – if it wanted to, of course!

Sock was excited, as any new addition to their little family meant a whole new adventure. The little toy car was, from that moment, known as ‘the new arrival’.

But Sock was curious. Shoe wanted to know what was happening, and where and why, “None of your business!” squeaked Sock. Uncle Doc Marten groaned.

The new car was sitting on the floor in the front room, with the empty box beside it.

‘Car’ had opened the box all by herself!

She had never seen a toy car like this before. No wonder it had arrived in a box!

The little car was bright yellow in colour. It had huge eyes (to see the road ahead) with big long eyelashes. And, as it turned its gaze on to Sock, she saw that instead of a car bumper, it had a full set of white, smiling teeth, with huge red lips, and it WAS smiling - at Sock!

“What do you want?” purred Car. The little Sock was so surprised that she nearly tripped over her ribbons. “I’ve never heard a car talk before!” she said.

“I’ve never heard of a talking sock either!” replied the car. “I’m here for the collection.” She looked up towards the other cars. “Miserable lot, aren’t they?!”

“Will you teach me to drive?” asked Sock. The little car had a thought.

It was not a stupid car by any means.

“I’m called Caroline” she replied. “And yes, but only if you can help me escape. I’m not going in there with THEM!” and she looked up at the miserable set of toy cars stuck in the cabinet.

From that moment, everyone welcomed the idea of Sock learning to drive, or, as Big Boot called it ‘driving us all up the wall.’

The Sock Babies in particular, had thought of a way of tricking Sock into giving them that extra penny to put in their pocket money box every week!

To celebrate Sock’s first driving lesson, TwinTwin had made a number plate with ‘SOC.5’ written on a piece of the cardboard box, and tied it to the back of Caroline car. Sock opened the passenger door and hopped in, looking out of the window, and at all the garden animals who had come along to watch.

“Whoopee!” sang Sock. Everybody was happy, and the little car set off along the garden path.

However, Sock would not have been so happy if she had seen the bucket of water, with the hosepipe attached, and the Sock Babies waiting around the corner.

Washing-up liquid had been squirted onto the path as well, to make a lot of large foamy bubbles.

“Have I passed my test?” asked Sock hopefully.

At that moment, a large gush of water soaked her and Caroline car.

The water became a frothy mass of bubbles and made Sock very soapy, and very wet indeed!

The little fellow started to cry. Caroline car stopped, and Sock jumped out on to the grass, trying not to trip over her dripping wet ribbons. What a shame!

“I’m going now!” said Caroline car. She was free. No cabinet for her indeed!

“Where are you going to go?” asked Sock.

“Back to the showroom” the little car replied. “I’m worth much more now that I’m clean! Don’t you agree?”

And it was true.The soap suds and water had left her clean and shiny. Like a new pin.

The Sock Babies, Ladybird, TwinTwin and Uncle Doc Marten all lined up to wave her goodbye. The little car trundled awaym happily.

And Shoe? She had known about the Sock Babies plans all along.

“You looked like you needed a wash anyway!” laughed TwinTwin. “You were almost grey!”

“If we dry you and lend you a new ribbon, can we have an extra penny every week? asked the naughty Sock Babies. “You can even lay in OUR shoebox for a while, AND we’ll tidy up the garden!”

“No!” she replied, and slithered away to bed!

« Back to MenuNext Story: The Great Panchatantra Tales »