The Brave Journey of Finnin

Once upon a day, there was a fish named Finnin. He lived in a pond called wigham.

Finnin used to think a lot and hence was disliked by other fishes. He used to think so much that it used to make him fall asleep.

As all of us have friends, so did Finnin. Melvin was Finnins’ best friend. However, was Melvin a fish?

No. Then who was Melvin?

Melvin was a turtle; it was a unique but a very close friendship.

One day Melvin asked his best friend Finnin, “Pal! Why do you keep thinking all the time?”

Finnin let out a secret that no one else knew. The truth was that he liked a beautiful gold fish called Zelda. Zelda was very dear to him, as he loved her a lot, although she never knew him. Finnin liked her but had never told her about it. She had been caught and was taken away from Wigham.

After knowing the truth, Melvin asked Finnin, where Zelda lived.

Finnin replied that Zelda lived in a big wooden thing on the top of the hill. Finnin was taking about a house.

“I must save her!” He exclaimed.

This was the big secret of Finnins’ life. This was why everyone in the pond thought he was crazy as he was always busy thinking. 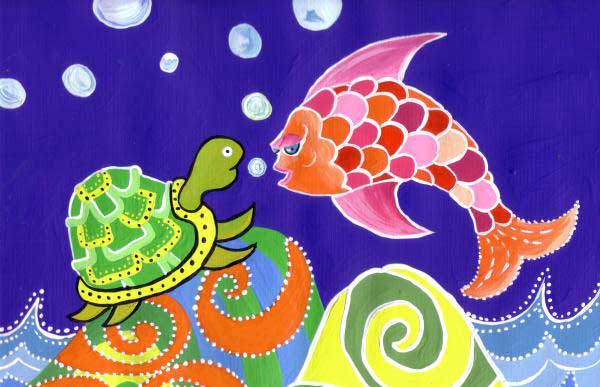 Melvin the turtle, tried to explain to his friend, that life outside their pond (Wigham) was very dangerous. “There are all types of scary things out there, including the dangerous cat, which would never leave a chance to gulp us up.”

Therefore, the two friends thought, thought and thought, until they could find a solution.

All of a sudden Finnin cried out, Amadeus! He is the answer to our crisis.”

Now, Amadeus was a very clever crab who also lived in Wigham. Finnin needed a plan to save Zelda, a plan that only Amadeus could give him.

Both of them reached the wise crabs house, though a little cranky at first, he called them inside.

“We need a plan!” said Finnin and explained the whole story.

Amadeus was aghast, “That’s a very bad idea if you ask me, you’ll be cat food if you go there!” explained Amadeus.

Finnin was determined to go, and thus looking at his determination, Amadeus agreed to give him a plan.

Shh! Amadeus whispered, “Drop in when the sun is directly on the pond, that’s the time when the furry animal is busy eating”. “All the best!” said Amadeus, with concern in his voice.

Finnin and Melvin trudged out of wigham at the right time, well stocked for their journey.

Fortunately, Melvin was a quick turtle, Finnin hopped on his back and they ventured deep into the forest, hoping for victory.

They finally reached the big wooden thing; there at the entrance they saw a mouse hole that belonged to Fred the friendly mouse. Fred often came to visit the two friends at the pond and had promised them that he would be happy to help, whenever needed.”

When they met Fred, the two explained the whole story.

“I’ll take care of the big bully! Don’t you worry?” Said Fred with determination and courage in his eyes. “That big, furry, four legged bully can never catch me!”

The cats name was Pete. As soon as the now three friends, Finnin the fish, Melvin the turtle and Fred the mouse entered the house, Pete the furry cat charged at them, Fred cleverly attracted the cats’ attention and took him the other way.

Finnin and Melvin ran towards something that looked like a mini pond to them that is where Zelda was swimming. She looked exhausted after being attacked by Pete repeatedly.

Melvin lifted Finnin towards the opening of the aquarium.

As Finnin reached the water, he shouted out, “Zelda I’ve come to save you!”

So Finnin, Zelda and Melvin headed back towards wigham, their home, their pond. Fred of course was now safe, but his race with the cat had made the cat breathless.

This opened a chapter of heroism in the small pond called wigham. The fishes who did not talk to Finnin, praised and sung about his bravery.

Zelda and Finnin lived happily ever after with their friend Melvin always by their side.

Moral: This story helps us to believe in the fact that, however limited our powers may be, however small we may be, our dreams, determination and hard work can help us achieve whatever we want to achieve in life. We just have to be ready to brave it all!

« Back to MenuNext Story: The Selfish Giant »