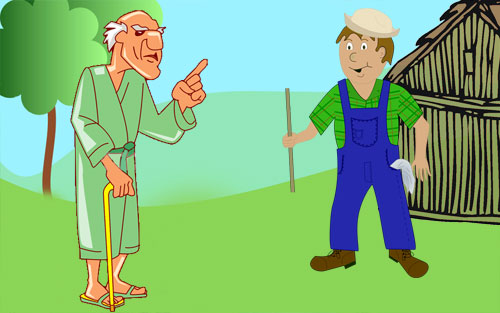 
Once upon a time, there lived a very lazy man named Harman. All day long, he would dawdle and lie on his cot in the backyard, observing the birds and flowers, and admiring nature. He would not lift a finger to do any work. If his wife ever asked him to feed the fowls or take the goats to graze in the nearby fields, he would feign sickness and refuse.

One day, a sage came to the village. Soon, word spread that the sage was a very wise person who had given sound advice to many villagers, who had sought his help regarding their problems. He always gave a portion of his food to the stray dogs. He was a mild-tempered man and never got angry.

Now, it so happened that one afternoon, the sage was meditating under a tree near Harman’s home. As usual, Harman was reclined on his cot, when suddenly; he spotted a snake with its hood raised at the meditating man. Alarmed, Harman quickly fetched a stick and then, moving stealthily and cautiously, he hit the snake on the head and killed it.

The noise disrupted the sage’s trance. When he saw how Harman had saved his life, he was pleased and blessed him. “I will grant you a boon, young man” he said, “Tell me, what is it that you want?”

Hearing this, Harman was overjoyed. He expressed his wish to get wealthy within a short span of time, without having to work much. “Very well,” said the sage, “If that is what you desire, you shall have it. Beginning from tonight, each night, you shall have a dream depicting the troubles of someone, the solution to which will be visible to you alone. If you save the concerned party with your knowledge, I am sure you will be rewarded. In such a manner, you shall soon be able to accrue a lot of wealth.” Harman thanked the sage and went home.

Later, he told his wife about what had happened and the boon that had been granted to him. However, Shanta, his wife, was skeptical, “Come on dear! The shrewdest way, was to become rich is through hard work. I have always been trying to make you see that. Anyway, you have chosen a short cut to your destination. Let us see how that goes.” Harman did not pay much heed to her words. “Beginning from tonight, I am going to tread towards a better future!” he laughed.

That night, in his sleep, Harman dreamt of the King. He saw that his advisor, with whom the King was very close, had stowed away bags of gold in a secret chamber, underneath the basement of his house. Then, the King was seen informing his advisor of some missing gold in the royal treasury, to which the latter feigned innocence. The advisor was also seen suggesting to the King that it could be one of the guards who could have done the act.

When Harman woke up in the morning, the dream was still fresh in his mind. He immediately set out for the King’s palace. When the guards refused to let him, a mere stranger, meet the king, Harman told them that he knew where the missing gold was present. When the King was informed of this, he asked Harman to be let in.

Harman greeted the King and immediately informed him of the secret chamber in his advisor’s house where the gold was hidden. The whole court was aghast at the news. The King warned him against fooling with him and insulting his trusted aide. However, Harman pleaded that the advisor’s house be searched as he was speaking the truth. Reluctantly, the King ordered his guards to do the same and soon, the gold was found, in the exact location as Harman had claimed. The King lost no time in putting the advisor to jail and rewarded Harman handsomely for helping him.

When Harman returned home and showed Shanta the rich sum of money that he had received, she was elated. To celebrate, she cooked a sumptuous meal, and they both ate happily.

This time, during his sleep, Harman dreamt of a rich landlord in a nearby district whose daughter was afflicted with a serious illness. In fact, she had grown so weak that she was confined to the bed all day. Medications prescribed by almost all doctors had failed to revive her. Harman saw a particular plant in the landlord’s garden, the leaves of which would help in curing the girl.

The next morning, Harman knew what he had to do. He travelled to the landlord’s house and offered a cure. As the landlord was trying all means to make his daughter better, he allowed him in. When Harman suggested the leaves of the particular plant be crushed and made into pulp, it was done and fed to the girl. To everyone’s utter surprise, within a few hours, the girl could walk like she did before. She claimed to feel more revitalized, and talked and laughed with zest. By evening, she could even be seen running from one room to another. The landlord and his wife were extremely happy. “To think that the cure was right there in our garden and we did not know of it!” exclaimed the landlord. Harman was once again given a handsome reward.

Days passed. Harman continued to have dreams every night and act upon them in the morning. Soon, he became a rich man in the village. However, his health deteriorated. Since he dreamt of people’s troubles every night, he was deprived of sound sleep. As a result, dark circles appeared underneath his eyes.

Each morning, even after his sleep, Harman was tired. He even stopped enjoying the tasty dishes that Shanta cooked for dinner, in apprehension of the dreams that would soon haunt him in his sleep. In fact, despite being wealthy, Harman grew morose and sad as soon as it grew dark. Shanta grew worried at his plight.

“Well! This is what you wanted Harman – to get rich within a short span. And it had happened. Why are you brooding about it now?” she asked. Shamefaced, Harman admitted that the boon that he had been granted had now become a burden to him as he could not get rest or sleep. “I am at my wits’ end. I should have listened to you and worked hard to become rich, not chosen such an easy way out,” he regretted. Shanta shook her head in commiseration. “The only way you can restore your peace of mind is to ask the sage to take back the boon.” Harman agreed and decided to do the same.

He learnt that the sage had moved to the neighboring village. Hurrying there, he sought him and pleaded him to take back the boon, as he did not want wealth at the cost of peace of mind. The sage smiled, “So you no longer want to get rich?” “Yes, I do,” replied Harman, “But not in a hasty manner. From now on, I will earn money working.” “Very well,” said the sage, “You will no longer have dreams from tonight.”

Since then, true to his word, Harman worked hard. He helped his wife with the housework and also opened a grocery shop, where through sheer effort, the business soon thrived. Shanta was happy to see her husband reform. She was thankful that the boon had finally made him realize his folly.

« Back to MenuNext Story: Weakness is Strength »