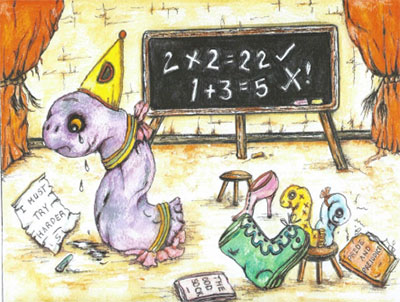 After a bad start to the morning, when the Sock Babies had been on their naughtiest behaviour, knocking over the laundry basket, and upsetting Slippers, Sock decided it was time to do something about such bad behaviour.

Sock had seen a leaflet being put through the letterbox the day before. It was asking for people to give their time and their help to teach others, who had problems at school. For free !

The word “school” had given Sock the idea. As the Sock Babies were now becoming naughty “Children,” what harm could there be in trying to teach them to read, write and listen to their elders, who clearly knew better than they did!

The problem would be to get them to sit still long enough to pay attention. Lessons in reading would be useful, to begin with.

Signs with “Keep off the grass” written on them meant nothing at all.

So did other signs. “WET PAINT” was another one which the Sock Babies didn’t, or didn’t want to, understand, and poor Sock had been seen trying to scrub wet paint from their ribbons many times!

In fact, it wasn’t just the Sock family who needed to go to school and learn.

Uncle Doc Marten wanted to learn how to avoid puddles, and Wellington boots.

Wellington Boot wanted to avoid Doc Marten and umbrellas. And Shoe Sweetheart wanted to learn how to mend a broken heel.

Everybody agreed it was a good idea, so Sock decided she would be the teacher, especially as she was cleverer than anybody else, (or so she thought!).

“What shall we use for a blackboard?” piped up Shoe.

Doc Marten had an idea. “I’ve seen one in the nursery, with some different coloured crayons” he replied. “Why don’t we have school classes in there instead? It’s a lot quieter and no-one ever goes in there!”

As Doc Marten meant that the “humans” didn’t go in there any more, everyone agreed. It wouldn’t be a good idea if their secret of coming to life was discovered would it? That would certainly make the ten o’clock news. Indeed!

So the blackboard was set up in the corner of the nursery, and everyone made themselves comfortable. Sock stood at the front of the class, looking pleased with herself. “Today I’m going to show you how to add up!” she smiled. “This is for the Sock Children, especially on pocket money days!”

The little socks stared at each other. Sock was giving them 5 pence each every week, which was always saved up in a little jar, marked “Socks’ Pocket Money Box!”

Anything they wanted to buy was paid for from this box, usually ribbons or buttons. But it wasn’t enough !

Sock picked up a white crayon in her mouth. “This is how you add up!” she smiled, and writing wonkily on the blackboard, she began. “Two plus two equals twenty-two, and one and three equals five!”

Sock looked pleased with herself. “Now, I want you all to write that down and remember it! It’s easy!” Sock did not know that both of her sums were very, very wrong indeed. The Sock Children laughed.

“We’ve written something for you!” they replied. Passing a piece of paper to Sock, she read the words they had written.

In large letters, it said “MUST TRY HARDER!” Oh dear!

Sock started to cry. Now she saw why Shoe, Uncle Doc Marten, Big Boot and the Children were all laughing at her !

“We’ve made you a present, for all your hard work!” said Big Boot, and gave Sock a big yellow hat to wear, with a huge letter “D” in the middle. Sock put it on.

“Dummy!” replied the Sock Children, cheekily. “Does this mean we can have more pocket money now?”

Sock, still crying, turned to look at them. She had done her best and this was how she was treated! It wasn’t fair at all! Looking them straight in the eye, Sock replied “NO!”

« Back to MenuNext Story: The Black Glove »