Short Stories » The Clever Jackal Who Was Too Wily 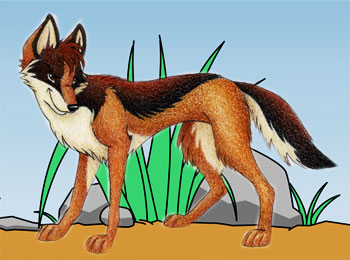 The Clever Jackal Who Was Too Wily


One day a clever jackal was wandering about in the forest in search of food. He had not eaten for three days and was extremely hungry. He knew, if this went on for another day, he may die. Therefore, he sat and thought of an idea on how to get some food.

He was aware that a farmer named Joseph, had a sugarcane field on the border of the forest. Joseph’s sugarcane fields had grown and he was planning to harvest them. He had fenced the boundaries of the farm so wild animals would not invade and destroy the sugarcane. Joseph had built a small tree house, so he could stay up there and watch the farm at night.

One night as he was sitting on his tree house, the clever jackal approached him. He told the farmer, “Dear Sir, your farm is soon going to be invaded by a huge elephant. There was shortage of food in the forest, so the big elephant living in the forest had decided to invade his farm. So be ready with your weapons.”

Joseph got worried hearing the Jackal’s advise. He had put so much effort in the farm and it would be a pity if the sugarcane fields were destroyed. He was left with no choice, but to take his bow and arrows and lay in wait for any intruders.

After visiting Joseph, the clever jackal went to the elephant. The elephant was grazing near a pond. The jackal went up to him and asked, “Dear Sir, it appears that you are not getting enough food to feed yourself. The problem is that you are a vegetarian and that you eat only a select lot of plants.”

The elephant replied, “You are right. I cannot eat all plants and am forced to travel from forest to forest, in search of food. It is a tedious task and there are days I even go without food. However, this forest is a bit better than the rest.”

The clever jackal smiled to himself and said, “I have some good news for you. There is a place where you can feast for at least one week.”

“That’s interesting. Please tell me more about it,” said the elephant.

The jackal told the elephant all about Joseph’s sugarcane fields. He added the harvest was to take place tomorrow or the day after. The sugarcane fields are ripe and will be a real feast for you.

The Jackal added, “He has fenced it, but the fence is no match for your might. You can go there tonight and feast until you are full. So don’t miss this opportunity.”

Thank you for providing me with this information. “I shall go there in the evening and creep in at midnight, when the farmer is asleep,” said the elephant. “That is a great idea, as Joseph sleeps like a log.”

The Jackal then visited the boundary of the field, where a huge and ancient oak tree stood, and was home to many animals. Joseph was standing close to the next tree and it appeared he was making plans for the night. “What are you doing here”, asked the Jackal.

Joseph replied, “I am searching for a place where I can have a clear shot at the elephant. “

The jackal then advised Joseph to stand under the nearby old oak tree as it had a great view. He added that he could also stand behind the oak tree and the elephant will not be able to see him.

Joseph was happy at the jackal’s advise, as he too had thought the same. Therefore, he decided to go to his hut, have an early supper and return.

The wily jackal then went to the oak tree. He was aware that a snake was staying on the base of the tree. He called out to the snake and told him, “Dear Sir, you are in great danger. The farmer, who owns the sugarcane field, plans to kill you tonight. Have you ever seen him?”

“Well, he has decided to destroy you and your family because you are a nuisance to his livestock”, said the jackal.

“What shall I do my dear jackal? He is big and always carries weapons.”

The jackal said, “Don’t worry, he plans to come here tonight and will be hiding behind the tree. Before he can react, go and bite him twice or thrice and that will be the end of Joseph”.

The jackal wished him success and bade good-bye. He was sure that his plan would work and if all goes well, he would have a dead elephant, man, and snake by the next day. That should be enough meat for a month and a half.

The elephant as planned slowly entered the sugarcane fields at midnight. The farmer noticing the elephants took out his bow and arrow, and shot three arrows at the elephant. The elephant cried in pain and fell. Joseph got down from the tree and no sooner he stepped down, he felt a sharp pain on his ankles. He felt as if an insect had bitten him a couple of times. Looking down, he saw a snake slithering away. Quickly, he raced after it and trampled it, and the snake was dead. Shortly, Joseph too fell down and died. The elephant also had died by now.

The jackal slowly ventured close to the hunter. He noticed the bow lying next to the hunter. He bit it to remove it from the way and in the process cut the bowstring. The tension in the string was so much that the sharp end of the bow entered the jackal’s throat and that was the end of the wily jackal.

« Back to MenuNext Story: The Clever Jackal And The Foolish Donkey »