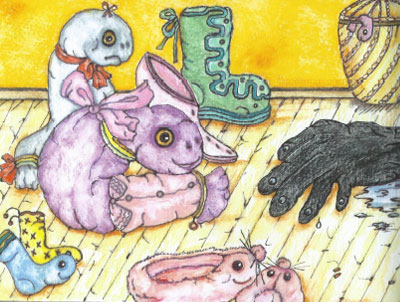 Monday morning and everybody was quiet after the weekend’s excitement. There had been some trouble, and some strange “goings-on” in the Sock Club.

This was to do with a strange, odd, black glove trying to make its way inside, and being refused entry. And why wouldn’t it? The idea of a Sock Club wasn’t to allow odd Gloves to join, was it? Otherwise, it should go and join the Odd Glove Club, if there was such a thing.

Sock was looking through the door of the washing machine, which was still closed.

All she could see inside were soap suds and a few bubbles.

Should she risk opening the door and see what all the fuss was about?

However, that descision was about to be made for her, as the Sock Babies rushed forward and, jumping up, pulled open the front door of the washing machine by tugging on it hard with their ribbons, so that a flood of soapy suds splashed out across the floor.

And, in that puddle of water lay a small black furry Glove ! It lay there soaking wet dripping from each finger and looking very much like a washed-up spider!

The little glove lifted up its middle finger and pointed it straight at Sock.

“Who are you?” it asked feebly. Slippers had appeared now, along with TwinTwin and Uncle Doc Marten.

This was turning into a very strange but interesting Monday morning.

“How did you get into our washing machine?” asked Sock. “And where did you come from anyway?” Sock had only ever met a glove once before, which had been laying on the bottom stair, underneath a woollen coat and it had tried to trip her up, so why should she trust this one now?

Everyone leaned forward as the Glove began to speak, while its fingers tapped, annoyingly, on the wooden floor.

Each finger had an eye, and was quite scary to look at.

“I was found” began Glove. “I was trying to escape when I was run over by a bicycle.

When I woke up, I was laying on top of a garden hedge, and covered with leaves and mud. I must have been rescued, but I don’t remember, and the next thing was waking up in a washing machine, with lots of angry-looking socks giving me dirty looks! And now, here I am lost!”

It started to sob loudly. After hearing Glove’s tale of woe, Shoe hung her heel in shame. Uncle Doc Marten fiddled with his laces, and the Sock Babies were quiet.

“Welcome to the Footwear Friends Club!”

“But I’m a Glove!” cried the little fellow. “How can I be a footwear friend!”

Sock thought about this for a moment. “You can be a special non-member!” she replied, and then added craftily, “That will cost you 15p!”

By now, Sock had realised that with eyes in each of those fingers, Glove could see in places where she could not, and not only find missing pennies, but pick them up easily as well and put them inside her money box.

Yes, having a Glove around would be really useful indeed!

During the next couple of days, Glove cheered up. Sock showed her how to make up the Shoebox, (which the Sock Babies slept in), how to open and close the washing machine door, (useful if the Sock babies were not behaving themselves!), and how to tie and untie ribbons and bows! Glove decided that she was going to do something nice to repay the favour. She was learning so much from Sock, after all!

One afternoon, whilst in the back garden, Glove noticed a large plant pot in which a pink ribbpn had been placed. Probably by Sock or TwinTwin.

Glove knew where she could pick up some cheap ribbons, with the odd few pennies which she had found laying around the hallway, (and kept).

She also knew that one of the coat pockets had a large hole in it!

Glove knew that by planting lots of coloured ribbons inside the pot, the silly Sock would think that they had grown overnight, as if by magic, but…. was it possible to keep this a secret?

Just at that moment, Shoe appeared, wobbling on her wonky heel.

“Can you give me a brush and polish?”, she asked nicely.

And everybody laughed good-naturedly.

« Back to MenuNext Story: Three Wishes for Sock »