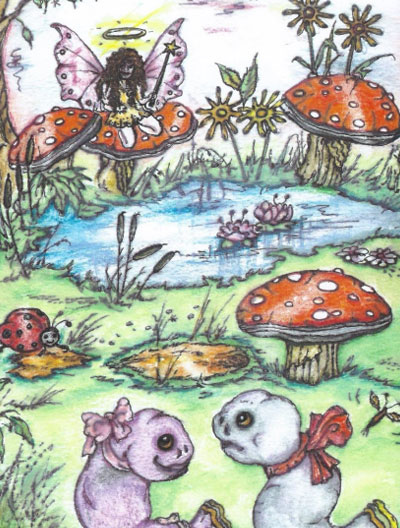 It was coming up to Christmas in “Sock House”, which was always a time for ribbons, chocolates and pink balloons.

It was also a time for celebrating that another year had gone by where Sock, the Sock Babies, TwinTwin, Slippers, and of course, Uncle Doc Marten, had not been donated to the Oxfam Shop!

At this time of year, the back garden was very nice indeed to play in. There was a magical feel in the mornings, as if every day was going to be a new special adventure.

And this morning was going to be just that!

TwinTwin and Sock had decided to go into the garden, using poor Uncle Doc Marten’s boot laces as a skipping rope.

The rest of the footwear family were still asleep. And so was Uncle Doc Marten !

TwinTwin suddenly noticed that a soft humming sound was coming from the direction of the fishpond. It was a bit foggy this morning, and a bit damp, but apart from the dragonflies buzzing around the garden, what else – or, who else – could it be?

“Shall we go and have a look?” asked TwinTwin. “Yes!” agreed Sock.

So the two brave socks went to investigate what was happening. They had not gone very far when suddenly…..”What’s this?” cried Sock. They had accidentally stumbled into the middle of a fairy ring, which had been hidden by toadstools, and by the looks on their small faces, these fairies did not look very friendly at all!

Especially as some Christmas magic spells were being planned, AND it was meant to be a big secret!

Seeing the guilty expressions on their faces, however, the Fairy Queen began to feel sorry for the little socks. Christmas time was for sharing, wasn’t it, after all!

“I will grant you three wishes!” she said, waving her magic wand.

“But only one of you can make them. Which one will that be? You have one minute to make your wishes – and don’t tell anyone else!”

The Fairy Queen looked quite crafty. She loved this time of year.

But all is never what it seems, is it?

The Fairy Queen waved her wand in the air, not once, not twice, but three times, as each wish was granted.

They were:
1) Free chocolate all year round
2) No more pink ribbons – and –
3) For the washing machine to stay empty all year round for free outings to the Sock Club!

However, things do not turn out in QUITE the same way as they are meant to.

“Thank you!” gushed Sock, as the Fairy Queen smiled.

“Enjoy your wishes!” she laughed, and all the fairies flew away, to grant some more, and knowing what socks did not!

Going inside the kitchen, Sock was taken by surprise. All the chocolates in the fridge had been eaten. The Sock Babies had been sick and were covered in chocolate sauce. Their ribbons, which had been pink, were now brown.

Also, the washing machine had broken down, so there was no water to clean all the chocolate goo in sticky puddles all over the kitchen floor! What on earth was going on?

TwinTwin turned round to laugh at Sock, as Uncle Doc Marten appeared, looking angry at waking up to find his bootlaces gone!

“You’ve got your three wishes!” said TwinTwin. “Exactly what you wanted!”

And poor Sock burst into tears.

And the moral of the story?

Never wish for something, in case it comes true!