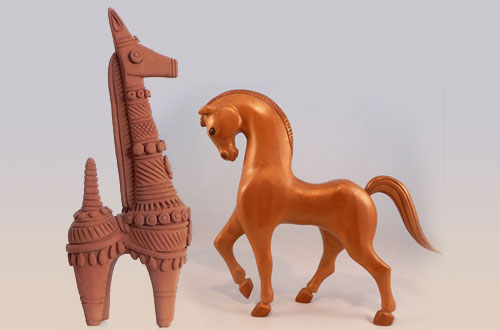 A Short Story About Two Horses


Once upon a time, there were two horses, which lived together on a shelf. However, these were not real horses, that lived and breathed, but they were real in another sort of way. The shelf they lived in was in a big shop. There, they were waiting for someone to come and purchase them.

One of the horses was a fine wooden horse, carved out of a single block of wood. He had a muscular body with athletic legs, and a magnificent carved mane. His body was rubbed smooth with sandpaper and he was deep brownish in color. The other horse was a Bankura Horse. He had a thickset body, four short perfectly shaped legs, and a very long, long neck. He was also brown, but he was made of clay, instead of wood.

One day the wooden horse, bored with sitting on the stand, stuck up a conversation with the Bankura horse. He told the Bankura that he was bored of sitting on that shelf all day, gathering dust and doing nothing.

The wooden sighed at his companion’s ignorance, albeit innocence, all the while shaking his mane. He was lost as to how he came to be a horse, not knowing what galloping was. He then added that galloping came natural to horses and it was all horses did, i.e., to run at nice, fast pace.

The Bankura was a bit apprehensive, when he heard about running, as he said it was something that he definitely could not do. “Aw, don’t be such a spoil sport. I am sure you would love it. That is what all horses do,” said the wooden horse.

The wooden pooh-poohed all this and called it as nonsense. He insisted that the Bankura was such a fine horse and that horses were meant to gallop. He commended on the Bankura’s strong body and long legs! He said that they were perfect for galloping and asked him to get ready to gallop.

The Bankura horse was still not satisfied.

“Bravo!” commended the wooden horse enthusiastically and was extremely pleased at the Bankura’s effort, and said that he will soon be galloping around in no time.

But the Bankura insisted that he was not sure as to whether to continue, as he did not like it very much.

The wooden horse was angry and was having none of this nonsense. He snapped decisively and ordered the Bankura to continue. The Bankura horse had no choice but to continue walk up and down. But, his steps continued to be jerky and uneven.

After a while, the wooden horse felt that the Bankura had enough of practice, and that it was time to gallop. He then advised the Bankura to watch him gallop.

Again, he pooh-poohed and ordered the Bankura to get on with it. However, the Bankura refused to move and said that he was not going to gallop.

The wooden horse got angry when he heard this, and he galloped at full force at the Bankura and banged him with all his might. The Bankura neighed and tried to maintain his balance, but it was too late. He swiveled unsteadily and pitched over the edge of the shelf.

“No,” he screamed and fell on the floor with a dull thud. The wooden horse watched in horrified silence and was too afraid to look down, as he was terrified at what he had just done. Slowly he gathered the courage to look down. The Bankura was lying in a basket, with his nose chipped, one of his ears broken and worst of all, one of his legs, was badly cracked.

He apologized profusely to the Bankura and pleaded with him to speak with him. But it was of no use, as the Bankura horse lay silent, with a vacant look in his eyes. The wooden horse kept on pleading, but there was no reply. Finally, the wooden horse drew back into a corner of the shelf, full of remorse.

The next day, the shop assistant noticed the wooden horse huddled alone in a corner, and wondered where the Bankura horse was. He looked around and spied the horse, lying in the basket.

But the shopkeeper felt that something was missing. He suddenly realized that the Bankura was missing his companion. That evening, he brought home his companion, the wooden horse, who had been sitting forlornly in the shop’s shelf.

The wooden horse apologized profusely and said, “I am sorry Bankura, can we be friends again?”

Bankura was relieved to hear this and they lived together peacefully on the shelf, and until this day, neither of them tried to gallop again.

« Back to MenuNext Story: The Day Walk Made a Friend »