Short Stories » The Day Walk Made a Friend 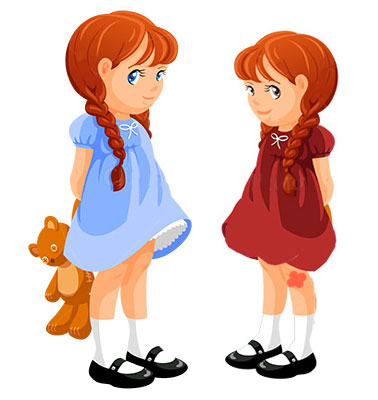 The Day Walk Made a Friend

Once upon a time, there lived a beautiful and extremely amiable girl named, Walk. She was a good girl, but she never liked her name as all the kids around her made fun of her name. She ran away from everybody who teased her name and hence, Walk never really had friends. She would play alone all the time.

On a regular day, when Walk returned home from school, she finished her homework as soon as possible and asked her mother, if she could go out and play. Her mother said yes, but warned her to not wander and go far away from home.

Walk was happy that day; she went to her favorite spot near the river running just behind her house. Walk had this theory that wherever the river was splashing and moving, it meant that the river water was taking to her. Walk spoke back to the river in her own little weird way.

Today, when talking to the river, she said, “You are so fortunate river, as you get to travel different places and always be with your friends- ducks, turtles, fishes, and plants. I wish I had more friends and wouldn’t be alone anymore.”

When she was bored talking to the river, she would pick up stones from nearby and try to skip them across the river like her dad. However, she would fail most of the times.

She would then say to the river, “I am getting better each day. I am more of a thrower than a skipper.” After many attempts at skipping rock, she finally finds a perfect rock, almost round, flat, and protruding at one end where she could hold and skip it in water.

She held the stone tight in her fingers, and innocently said to the river, “Oh dear river, If only I could skip this rock and make a wish, I would wish for a dear friend just like you, and if the rock skips all the way across you while wishing, I wouldn’t be as lonely as I am now.” Saying this, Walk whipped her arm back just like her dad had taught her and skipped the rock across the river with full force and dedication.

She watched the rock skip once, twice, thrice, and she kept wishing for a friend while counting. To her amazement, the rock went on skipping for the fourth, fifth and sixth time, and eventually on the seventh skip, it finally made it across the river on to the shore of the opposite side. Walk was totally taken aback. She had been holding her breath so hard and wishing so desperately that when the stone skipped the river and landed across she could not just believe her eyes.

Her deep thoughts and sheer happiness were disturbed when she heard footsteps coming her way. Walk immediately came to senses and started looking around. A little girl was tumbling down towards her. Walk panicked and started to run but she lost her balance and she fell off too. Rolling down towards the river, the unknown little girl and Walk fell almost on the same spot beside each other.

The tumbling girl was crying profusely and endlessly holding on to her knee. Walk pulled herself together and went close to the girl to help her. Walk saw that the girl’s knee was bleeding. She said the calmest words to her, “It will be alright, I will help you clean the wound.” Walk took some water from the river, washed away the blood from the wound, tore a piece of cloth from her skirt, and tied it around the wound on the knee to cover the cut. She politely said to the girl, “My house is nearby, let me help you, my mother will take care of the wound.”

Walk helped the girl walk until her house. Once they both had reached Walk’s house, Walk called out to her mother, “Mother, there is a girl with me and she fell down by the river. Her knee is cut and there is blood all over her dress.”

On hearing this, Walk’s mother came running out of the kitchen with the first-aid box. She made the little girl sit on a couch and started cleaning the wound. She cleaned her knee with an antiseptic and applied colorful bandages to lighten up the girl’s face. She then enquired the girl asking her where she lived. The girl promptly told Walk and her mother that she had just moved in a house probably next door. All the houses looked so similar that she mixed up the one she lived in. Walk gasped and felt a hint of joy think about her wish.

The little girl looked at Walk and asked, “What is your name?” Walk was stunned and scared to tell her name because she did not want the girl to make fun of her name like other kids. However, Walk’s mother replied, “Her name is Walk and I am glad she could help you.”

On hearing this, the little girl began to laugh and almost happen to fall on the ground. Walk felt the pinch and she was on the verge of breaking into tears. Walk closed her eyes, and said to herself, “Is this the friend I get in return for my wish?” Just then, the girl stopped laughing and voluntarily said, “I am sorry for my manners, but it is absolutely funny as my name happens to be Run.”

Walk gave a surprised look to her new friend and almost broke into laughter herself. Just to make sure she asked Run whether her name was seriously “Run,” and she was not trying to make fun of her. Run reassuringly said to Walk, “You helped me and wiped my wound, why would I ever lie to you or even make fun of you.”

Listening to these words, Walk felt tremendous happiness and was filled with joy. Her wish to the river had come true, and now she had a very good friend named Run.

Walk would never forget that day. It was the day Walk and Run became the best of friends forever.

« Back to MenuNext Story: The Friendship of a Lion and a Mouse »