12 year old Smiley was a paragon of virtues. She imbibed good qualities from bed time stories and the long discussions she had with her grandparents when she accompanied them on morning walks. She was a good daughter at home and a good student at school. Smiley had a huge library with hundreds of books on different subjects.

Smiley’s younger brother, Henary, who was 8 years old, was the polar opposite of her. He did not take care of personal hygiene or academic responsibilities. He always made a fuss at the time of breakfast, lunch and dinner and preferred fast food over healthy food. He was a big criticizer of green vegetables and fruits by calling them “Ghass-Fush”. At school he got punished for reaching late, not completing his homework due to watching long time T.V. and playing games only. He was actually jealous of his elder sister Smiley and due to this he quarreled with Smiley on any matter any time. Unsurprisingly, at school Henary had few friends. His teachers also complained about him.

Henary΄s birthday was coming on 5th March. As per the advice of Smiley, her parents made a plan to change the bad habits of Henary. by ignoring him for his bad habits at the time of his birthday party and admiring Smiley for her good habits. When the birth day came, there was a grand party organized at their home: All the family members and friends were invited. After the birthday cake cutting, and the presenting of gifts, flowers and wishes to Henary, most of them wanted to talk only with Smiley and about her good habits. Firstly, Henary ignored this, but suddenly he started to cry. Everyone stopped and asked Henary what had happened to him. Now, Henary told everyone, "I also want to be a good person like Smiley. I promise to my parents and friends that from now onwards, Henary will be a good boy."

After listening to this, everyone clapped for Henary and wished him good luck. Smiley was smiling with her parents, because their plan had worked. Everyone enjoyed Henary΄s birthday party followed by a healthy dinner and went home discussing and understanding the benefits of good habits in life. 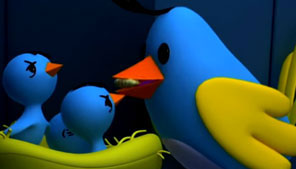 Animated Story Videos
Who helped those little birds whose mother was lost? Watch this colorful story and enjoy! Explore our site to watch more educational and inspirational animated stories for kids.