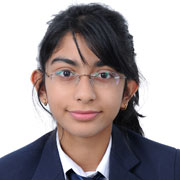 “Was this a Blessing or a Curse?” by Michelle Saji Antony, Bahrain, is the Second Prize winning story in the senior category of the first biannual Short Story Contest 2018.

Was this a Blessing or a Curse?

It was this very question that repeated itself over and over again in her mind, sounding like white noise as it delved into her brain.

Finally being in the bus – a C-16, Evacuation-Specialized Model – made her realize this nightmare was actually happening. A tight coil of fear wound its way through her abdomen.

Earlier that day, Genevieve had been perfectly happy. It was her birthday, and her birthday gift was a journey to Marblemere, the neighboring city, which would begin Friday Evening.

Well, Friday evening was here, and she was in a bus on its way to Marblemere, but it was not for what she had originally thought the journey would be for.

Her hometown, Clarettesburg, was being evacuated. The announcement was abrupt and confounding, made by the government at precisely 6 AM.

“This public service announcement is to inform you that a nuclear spill has been located in the waste A-2 Plant located in the heart of the town. Large amounts of lethal sephatonin gas are currently in circulation. Immediate evacuation is under effect, and all citizens are required to make their way to the C-16 Stations located all around the town, as fast as possible.”

It was a harrowing experience. As her family made their way outside, the crowds and the worried look on people’s faces made it increasingly evident that this was not a drill.

But in the hassled crowd, one face clearly stood out…the face of a boy, whose earnest blue eyes scanned her face hurriedly before disappearing into the crowd.

She knew that boy. His name was Theodore Anderson.

And as Genevieve and her family got into the C-16 and made their way to their seats, there was only one burning question in her mind.

Was this a blessing or a curse?

Genevieve had never been happy in Clarettesburg. It was a place seeped in bad memories, and deep inside, she was glad to be getting out of it. Dark, yes, but in her heart she believed that even bad things happened for a good reason. Besides, the prospect of living in a bustling metropolis like Marblemere made her excited.

Ever since she was 6, It had been her greatest wish to become a famous photographer, the likes of which the world had never seen before. However, Clarettesburg wasn’t a very developed place. Some areas of it hardly had schools which taught more than three subjects, let alone photography courses. Marblemere, on the other hand, had a photography school. It was a huge city, well-developed and busy. Sometimes, all she had in the world was her beloved dog and her passion to capture moments.

It was her greatest wish to get out of this hellhole, as far away from it as possible. Admittedly though, this was not how she had planned her great escape.

Beside her was Theodore, the boy. Her brother had been sitting here a few minutes ago.

“Hello, Theodore. May I help you?” She asked, and the chilly undertone in her voice was blaringly conspicuous. Theodore didn’t seem affected by it. “Genevieve, I know you’re exasperated at me for what happened all those years ago…but we’re 15 now. I think it’s time to put this behind us. What do you think?”

Four years ago, when they were in the 6th grade, Theodore and Genevieve had been arch-enemies. There had been an art contest which they both had taken part in. The first prize was a brand new Leica 550 digital camera, and Genevieve was eager to win it. Alternatively, it had been Theodore who won it, by cheating. He had commissioned the artwork. When he won the camera, he exchanged it for a skateboard and treated his friends with a huge meal. Genevieve was so livid, her insides shriveled up with hate, and she did something she would regret.

She spread a rumor that Theodore had copied in the Annual Exam that would have earned him a scholarship, had the rumor not been spread. When this was acknowledged by the authorities, they suspended him for a month. This regrettable action of hers had sparked a large amount of glares, courtesy of Theodore.

“Fine. Water under the bridge.”

Theodore lowered his voice. “Actually, I came here to give you a tip. I was the last person to get into a bus. I noticed one dog get left behind, and he didn’t make it into the Animal Evacuation bus…Gen, I’m sorry…but I think it’s yours. You have to go save it!”

Emotions swirled around in her brain. That dog was the one thing making her want to keep living.

Suddenly, The bus trundled to a stop. She heard faint voices up at the front. “Something wrong with the engines! Don’t worry people; it’ll only take 2 minutes.”

“Genevieve, hurry! This is your chance! Take this. It’s a map, since your phone’s GPS won’t work anymore. The cell towers are all dismantled.”

In a frantic sort of frenzy, she clambered out of the C-16, as unnoticed as possible. Once she got out, she ran and didn’t look back. Her feet were so fast; she was almost gliding across the grass.

A bus flew past her, at an enormous rate of speed. She watched it go by, but then she saw a glimpse. It was a glimpse of a dog wearing a red collar with a shell charm on it.

It was her dog, safe and sound in an Animal Evacuation C-16 bus.

For a minute, she was relieved. But then, her heart began to thud as she realized she was still standing there, and there were no buses as far as the eye can go. Shock rooted her to the ground, and a tear squeezed out of her eye.

She ran and ran, but to no avail.

She had been left behind. Abandoned.

She sunk to the ground. Her shaky hands unfolded the paper Theodore had given her. It read:

Be Careful Who You Trust