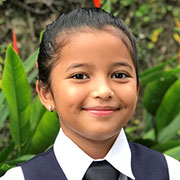 “The Wise Boy” by Alia Binti Ahmad Shahriman, Malaysia, is the Highly Commended story in the sub-junior category of the first biannual Short Story Contest 2018.

Adam was an orphan boy who lived in a remote mountain village. After the death of his parents, all the villagers helped to raise him. When he was old enough to wander on his own, he started to help other villagers with their daily chores.

One day, while Adam was gathering firewood for one of his neighbours, he heard horses galloping and men screaming in the village square. Adam quickly hid behind a clump of large rocks. When the noise subsided, he peeked through the gaps in between the rocks. He saw the King addressing all the villagers in the village square.

When the King and his men went away, all the villagers started to cry as they do not know the secret of immortality. Adam came out of hiding and started to cry as well. That night, Adam could not sleep. He was wide awake trying to think of how he could save his village. As he was gazing at the stars, an idea came to him. Adam smiled and went to sleep.

Adam confidently went up to the King and told him that he knew the secret to immortality. The King asked Adam what the secret was.

“Your Majesty, legend has it that, you have to complete three tasks to become immortal” said Adam.

The King asked Adam what the three tasks were.

“Your Majesty, legend has it that to be immortal, you first have to build a house for the poor, the orphans and the old.” said Adam.

The next day, the King summoned his men to build a big house. After his men finished building the house, all the villagers came to see the house. The house had many rooms and a large kitchen with cooks to prepare meals for everyone. All the poor, the orphans and the old were very happy. They all cheered for the King. The King was pleased.

The King asked Adam what he had to do next.

“Your Majesty, legend has it that to be immortal, you then need to build a hospital for the sick." said Adam.

The next day at the crack of dawn, the King ordered his men to build a large hospital. They built a hospital with many rooms and treatment halls with doctors to treat the sick. The sick went to the hospital and praised the King. They all cheered for the King. The King was pleased.

The King asked Adam what the last task was.

"Your Majesty, legend has it that to be immortal, you would have to build a magnificent school where all the children in the village can study." The King agreed and planned to build the school the next day, as all his men were tired and sore.

When the next day came, they started to build the school. It took them a long time to build the school as their shoulders were still aching. When the school was finally ready, it had many classrooms and teachers to teach the children. All the villagers sent their children to the school. Adam attended school at that time as well. The children and their parents were very happy and all of them cheered and praised the King. The King was very pleased.

The King asked Adam “Now that I have completed the three tasks, how do I become immortal?”.

Adam looked at the King and said “Your Majesty, you are already immortal. This village will remember you forever for all the good deeds you have done for us!”.

The King smiled and responded “You are a very wise boy. Thank you for opening my heart. I will do good deeds all over the Kingdom so that the people will always remember me.”. The King and his men rode away with the whole village cheering behind them.

Adam was happy that he managed to save his village. That night he went to bed smiling, thinking about his new home and school.