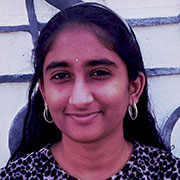 “The Pursuit of Self” by Bharti Rajesh, India, is the Highly Commended story in the senior category of the first biannual Short Story Contest 2018.

The Pursuit of Self

‘Here lies a girl who truly just survived her life’, these would be the words engraved on her gravestone if she gave up today.

Bhoomika star gazed by the shore line. It felt as if all the stars gathered for a barbeque around the moon and that was such a mesmerizing sight that would compel one to paint on their heart. She closed her eyes and tried to distract herself by listening to the splashes of the smashed stones.

Where will I find myself?

How will I find myself?

She did almost everything that was advised to her - from going for a world cruise to visiting Kashi, Jerusalem, Bodh Gaya and Mecca. But the void in her didn’t fill up. She still felt as if a huge chunk of her was missing. A gnawing feeling that was clawing through her stomach, ripping her from inside out that didn’t go away.

She could see white lights from a distance; it was a police officer who was running patrol near the beach side. She decided to get moving to her house as it was very late.

When she looked up to the sky to get assurance from the stars that were still watching over her, she realized that raindrops were falling on the earth. She did not carry any umbrella and so she started running over to an abandoned shed which was on the road side. The rain water managed to drip into the shed through the apertures.

Bhoomika sighed and tried to control the uproar of emotions pervading in her mind. She could not fathom the reason she was feeling this way. Maybe it was because of her school work, or her parents, or friends, or her teachers, or her relatives, or maybe it was because of the black cat that crossed her path last week or maybe she herself was the reason. She wanted to blame the whole world for her upheaval.

Bhoomika bit her lip to control her tears from flowing but as usual she couldn’t stop them. It is then that she heard a loud wail. She turned her head and strained her ears to find from where the sound was emitted. She looked around to find many empty drums and packages. The wailing was insistent and it provoked her to move rapidly.

She found a cardboard box in which she found a kitten. It was black in colour. The kitten was mewing and trembling in the cold air. It was so small and innocent that Bhoomika felt forced to bring the tiny animal close to her. She cursed herself for blaming the black cat for her upheaval. What an irony!

The kitten could also have given up, but it didn’t. This little thing cried out for help because it wanted to live. No one had abandoned her like this but she abandoned herself . Even though the kitten’s owner abandoned it, it did not abandon itself, it did not give up on itself.

The kitten started to squirm in Bhoomika’s arms as it felt a bit suffocated with the way Bhoomika was holding her, quite tightly. This kitten was truly a fighter and a miracle as it survived the cold and the congested box as a baby animal.

From now on, if she ever died, she would make sure that the words engraved on her gravestone would be ‘Here lies the girl who truly lived her life’.