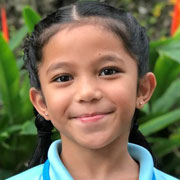 “The Magic Horn” by Aisha Binti Ahmad Shahriman, Malaysia, is the Highly Commended story in the sub-junior category of the first biannual Short Story Contest 2018.

Susan and Sofia were two sisters that lived in a small village. Their parents worked in the city to provide them with food and clothing. Their parents would only come back to the village on the weekends.

They spend a lot of time on their own and would do everything together. While they love each other, they were unhappy because they were poor. One day, they decided to go into the forest to explore an old castle. They wanted to look for treasure so that they could buy whatever they wanted.

When they arrived at the castle, they heard a voice calling out for help. It was coming from a well. They looked into the well and saw an old lady struggling to climb out. The old lady had fallen into the well. Susan and Sofia grabbed a long stick and helped the old lady to get out of the well.

The old lady was very thankful to the both of them. She asked them what they were doing in the castle. They told the old lady that they were looking for treasure. The old lady gave them a magic horn as a gift. She told them that the horn will let them find a valuable treasure. When she finished talking, the old lady suddenly disappeared. Susan and Sofia went home with the magic horn.

That night, both Susan and Sofia blew the magic horn together and went to bed. When they woke up the next day, they were covered with gold coins. Susan and Sofia were very happy. They decided to go to the market to buy new stuff for themselves.

At the market, Susan and Sofia started to argue about what they should buy. Even though they had a lot of gold coins, they could not agree on what to buy. They argued so much that they ended up not buying anything. They both went home angry.

That night, they were both sad because they were fighting. Before going to sleep, each of them wished in their heart that they did not blow the magic horn in the first place. They do not want to be upset with each other.

Suddenly, the old lady appeared in their bedroom and transformed into a beautiful fairy. The fairy smiled and told them that the real treasure was having each other. The fairy took the magic horn back and all their gold coins before disappearing.

Susan and Sofia were happy even though they were no longer rich. They realised that having each other was the best treasure they could have.