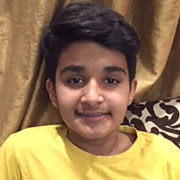 “The Late Night Scare” by Varchasva Sharma, India, is the Highly Commended story in the junior category of the first biannual Short Story Contest 2018.

I got into a habit of going to sleep very late every night, and to entertain myself, started ordering food online. As I was good in studies my parents gave me a lot of pocket money whenever I passed the tests with flying colors. My parents didn’t know I used to order food at night after they went to bed. I now regret that habit after something weird happened.

It was 2 A.M. in the night. I had ordered the food about 20 minutes back. Suddenly, there was a knock on the door. I had given the delivery man strict instructions not to ring the bell because of my parents. I opened the security door chain, made the payment of Rs. 1200 and took the food. I sat in my room and was enjoying the delicacies when I noticed a call on my cell phone. I picked up the phone and the voice on the other side said, “Sir, you have not made the payment, I have been waiting for that”. When I replied I had made the payment, he started to speak in a sterner voice. Not wanting to argue with him and wake my parents up, I gave him Rs.1200 once again.

After a week or so, I ordered food at night once again. When I opened the door, I noticed the same man who had delivered the food the previous week. While handing over food to me, the man asked me a few strange questions. After answering his questions, I took the food items, paid the bill of Rs. 1400 and shut the door. I was about to eat my sumptuous food when I heard a light knock on the door. As I answered the door, I heard the delivery man muttering about payment. I whispered to him that the money had been paid but on that he raised his voice and told me that as I was sleepy I failed to even remember whether the money had been paid or not. I knew he was exploiting me but I did not want to wake my parents owing to any noises and so I paid Rs. 1400 once more to get rid of the situation.

Then there was a third time. I opened the security latch, received the food, made payment of Rs.1500 and closed the door. I waited for the men, this time three in number, to leave when suddenly I received a phone call.

“Sir, you forgot to make the payment even today!”

“Let me do away with this nonsense!” I told myself.

I called the company I had ordered food from. When I informed about the three men, the company’s answer ran a chill down my spine! “Sir, we never sent three men to your location.” I immediately locked all the doors of the house. I was thinking as to what I should do next, when a voice from behind the door disturbed my thoughts. “Sir, give me the money”. I told him to wait for a few more minutes as I was trying to collect money without waking up my parents.

I immediately called my tower guard and told him to lock the main gate of the tower. Then, I called the police and urged them to reach my house. I also requested the manager of the food chain outlet to rush to our tower to witness firsthand what his delivery men were upto.

Within 10 minutes, the manager and the police reached my house. Then I approached my parents to wake them up. I briefed them quickly. Almost in no time the three goons were arrested by the police.

Subsequently, my parents had been analyzing the chain of events endlessly. They wondered whether giving me so much pocket money was advisable or not and were surprised on how they were unaware about what had been happening to their teenage son!

As for me, I thought I can’t feel proud about ordering food so late in the nights- but I shall always remember and be proud of how quite early in my life I could succeed in tackling a scary situation on my own.