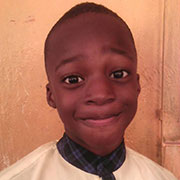 “The Great Escape” by Bibire Mohammed, Nigeria, is the Highly Commended story in the sub-junior category of the first biannual Short Story Contest 2018.

Father announced that Saleem was ready for the Eid but I loved Saleem. He was my best friend. I was not going to let anything bad happen to him. The same evening that Father made his announcement, I took a stroll with Saleem to my friend’s house down the road and hid him there. I promised Peter a lot of sweets everyday till the festival passed. He promised to keep Saleem safe and out of sight. Father was angry. The Eid was a few days away and the ram was nowhere to be seen. He kept asking everyone where the ram was. He asked Mother and she said she did not know. He asked my sister and my brother and they said they did not know. He threatened the security man and he swore that he did not know. The last time the security had seen the ram was when I took it for a walk and he told Father so. Father pulled my ear sharply and asked where Saleem was. I looked him straight in the eye and told him I did not know. He let me go but kept looking at me suspiciously. I did my best to keep out of sight and stay out of his way until the festival passed. I did not know when he followed me to Peter’s house as I went to make my payment the next day. He cuffed me and dragged ram and boy screaming and kicking back home. ‘Your son stole our ram!’ Father yelled at Mother. ‘He was only trying to protect her’ Mother said. ‘Her?’ exclaimed Father and I. ‘Saleem is a she?’ I asked. Father scratched his head and said, ‘I would have sworn…’ Mother laughed. ‘She is big for a ewe but did you not notice she had no horns? And look, she is going to have babies.’ That was how Saleemat escaped the Eid. She has had several babies since then and she is still my best friend.