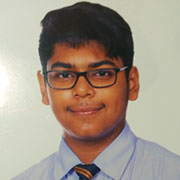 “The Divine” by Koneshka Bandyopadhyay, UAE, is the Highly Commended story in the senior category of the first biannual Short Story Contest 2018.

It was the winter evening in New Orleans as Aaron had just arrived at his hotel along with his wife, Chelsea. Aaron Bishop was a private detective and was on a vacation. He checked in the hotel of ‘Grand Hill’. It was one of the superlative hotels in the city.

His room number was 1503, so he entered the elevator, where he found the elevator operator. The man asked, “Which floor sir?”

“My pleasure, sir!”, replied the man in the suit.

As soon as he entered his hotel room, he decided to skip dinner and sleep as he was tremendously tired. The next day, Aaron and his wife were to go to the second floor to have breakfast. He freshened up and took a bath before he got out of his room. Both he and Chelsea were headed to have breakfast. He pressed the elevator button as it opened in mere seconds. It was him again, the elevator operator. Aaron said, “We’re going for breakfast, so second floor please?”

The operator replied, “Oh…sir, uh…It’s considered an unlucky number, so while making this hotel, the number wasn’t considered.” “Right. Good to know”, said Aaron with a tad bit of suspicion.

The elevator had reached the second floor, so Aaron and Chelsea got out and started to have their breakfast. After breakfast, the couple returned to their room and decided to wait for the celebrations of Mardi Gras, which was a festival celebrated specially in New Orleans. It was the reason Aaron wanted to come here. Mardi Gras is one of the most unique festivals celebrated in New Orleans during the first three months of a new year. The festival was to start from the next day, which was 4th February. The entire city was waiting for this festival.

In the evening, Aaron and Chelsea were off to have dinner, while doing so, they noticed that the elevator wasn’t working, and they had to use the secondary cargo lifts. After they reached the ground floor, they noticed a number of people with complaints over the defective elevator. Aaron and Chelsea weren’t concerned over it, as they expected the elevator to be in a working condition soon, as it was one of the best hotels in the city. Aaron had suspicion over that elevator as he looked at it for a while.

Chelsea asked, “Hey, is everything alright? You seem a bit dazed and disturbed.”

“Yeah… yeah of course. I’m fine. Come on, let’s go. Dinner is waiting”, said Aaron with a bit of hesitance.

Aaron and Chelsea returned to the hotel after a couple of hours. The elevator was back in a working condition as the two entered in it. The elevator operator was back too, and he was in a charming mood as always. After they reached their hotel room, they went to sleep hoping for a remarkable next day as it was the start of the festival.

The next day, Aaron woke up to a loud crowd outside the hotel celebrating the festival. There was a parade followed by the crowd as well. Everything was so ecstatic and astonishing. The entire city was involved in the celebrations. Aaron and his wife freshened up and hurried to go outside and join the festivities. As everyone danced along a huge line of crowd, Aaron noticed the elevator operator, running into the back alley beside the hotel in a very suspicious manner, so he told his wife, “Hey, I’ll be back in a bit. Just continue on, I’ll catch up.”

Aaron followed the man to the back. He made sure that he wasn’t spotted so he maintained some distance between him and the other man.

There was a back-door which led to another elevator. Aaron saw the man entered in it, so after the elevator was gone, Aaron went and pressed the button. The elevator returned after a few minutes, which was bizarre to the fact that an elevator only takes seconds to come and go. After it arrived, Aaron entered it and noticed something very eerie about the numberings. There were only two buttons. One was ground floor and the other was thirteenth floor. Aaron had his gun by his side at all times, so he pulled it out and took his chances by pressing thirteen.

The doors of the elevators closed as Aaron waited. After a minute, the elevator stopped, and the doors opened, but it wasn’t the front doors, but rather the back ones. Aaron exited the elevator and found himself in a huge room. It was like extension to the hotel, but the location was unknown. Room was dressed similar to a restaurant with a number of tables and chairs. The room led to three other doors. As he started looking around, he heard some noise coming from the door in the middle.

Aaron heard whispers saying, “Is it ready yet? I’m paying you a million. It will better be worth the price.”

The reply came from a voice which was familiar to Aaron. It said, “Don’t worry sir. I’m sure it is.”

It was the voice of the elevator operator. Then, he heard footsteps coming towards the door, so Aaron hurried to hide under a table clothing nearby. Aaron peeked from the corner of the cloth and noticed two men go to the room left to the one in the middle. After they closed the door, Aaron got back up and entered the room in the middle with hopes of no other person being in there. With mere shock, the room was filled with hundreds of symbols all around the walls. Something was definitely up, so Aaron had his gun ready just in case. He exited the room to enter the other one, but before he did that, called the police and gave them specifications on the case. The police were on their way, so he needed to do was wait.

Aaron decided to take some pictures of the walls for later research. Then, he slowly entered the other room and caught the two men in the middle of a murder. The other man beside the elevator operator had a knife in his hand and was about to murder another man lying on the ground with almost no energy to move. The operator surrendered with his hands in the air, but the other man didn’t hesitate. He continued and used the knife to kill the innocent man.

Then, something extremely bizarre happened. The body of the person started getting covered by a layer of shining white. The eyes of the men around were astounded. Aaron was simply left confused. He shot the gun while pointing it upwards to engrave fear into the two criminals and shouted, “What was that?! What’s happening to him?”

“He’s a part of the divine now. We’ll be too, in a few minutes. Haha…Hahahaha! The knife works! It works!”, said the man holding the knife.

Then, the white shine from the body started to spread like water. It was all over the floor and all over the walls. Then, it started to consume the legs on Aaron, the elevator operator as well as the other man. It took over. It started covering the bodies of all three men. Aaron lost control over his body and his mind was pure. He had nothing in mind. Everything seemed as a blank to him. His mind had reached absolution.

A few minutes later, the police arrived in that exact same location in the mysterious floor. They looked around and went through all the rooms. The entire floor was empty. The room led to three other rooms and in the room to the left, the police found a gun and a knife on the floor. The items were taken in for custody and the investigations were put to a halt after a few hours when no lead was detected. The room in the middle was found empty. Plain white walls and white floor. On the other hand, Chelsea Bishop was still unidentified about her husband’s random disappearance as she continued to celebrate the festival.