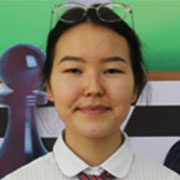 “Mearthens” by Zhumabekova Aidana Islambekovna, Kazakhstan, is the Highly Commended story in the senior category of the first biannual Short Story Contest 2018.

The world is full of abnormal disasters: tsunamis in Japan, droughts in North Africa, hurricanes in Haiti, volcanic eruptions in Italy. And the number of such natural anomalies is uncountable. Humanity is in danger of extinction, so moving to the planet Mars is the only way out.

- Dear colleagues and participants of the secret Experiment "X22878", on behalf of all the inhabitants of our planet, we congratulate you on the successful passage of the qualifying round for sending to Mars. Not all of you knew about this trip, but now you have no choice, because only you can save the human race.

In a couple of days or hours the Earth will become unfit for human existence and the apocalypse will begin. We do not have time; you immediately set off on a space trip.

- Attention! In a few hours you will fall asleep for a year and when you wake up you will already be on Mars.

The only ones who feel excited and delighted with the trip are Jonathan Hardy, a tall guy of 17 and Matthew Austin, his best friend and companion. They have supported NASA from the very beginning and are interested in life beyond the Earth, so NASA places special hopes on them. Other participants in the experiment do not understand the whole point, but within 2 hours they are put on a huge spacecraft Oreet B2541.

- We have safely arrived on Mars. I want to warn you that people of different ages and mindsets have not come here in vain: one-year-old children, teenagers, elderly and young. For each of us, the bodies will respond to the changing situation at the same time. Not the fact that your physiology will get used to the new conditions. Be careful. Do not touch anything without the permission of scientists.

Every life counts, everyone matters.

Jonathan and Matthew quickly get used to the new place and each day they contribute to a small community on Mars. They build houses with architects, explore Mars bacteria with microbiologists and teach small children.

A few days later a wave of deaths starts. The first to die were the elderly, after them people older than 30 years old start to pass away. The young lose hope and begin to fear for their lives.

Although Jonathan is only 18 years old, many regard him as their leader and listen to his wise words. So he gathered the remaining people and said:

- We have come here from Earth. Our native planet no longer exists. The earthlings are the culprits of the event: they polluted the ocean, killed animals and depleted all the resources of the Earth. Anyway, we left all our loved ones and we are creating a new World here. Perhaps after some time we will be able to return to the ruins from which we were sent here. But now our main goal is to save the human race. Maybe we will all die when the human body reaches its limit. But children who are born on Mars can live a full life.

Then Matthew continues supporting the words of his friend:

- Our relatives did not die in vain, they were trying to reach the purpose. Let’s build the future for our generation, Mearthens.

Everyone claps their hands; many of the children are shedding tears. But it is clear that the words of John and Matt reaches their hearts making them feel motivated.

- Why did you call us “Mearthens”?

- We are not Martians, but at the same time we live on Mars. And we are not earthlings, because we have already left the Earth. So, “Mearthens” should become the name of children of Earth and Mars.

- Sounds great! I think we will have a hard time. It is necessary to restore civilization and motivate Mearthens to fight for life. But whatever happens, promise that you will not be alienated from me.

In 13 years the population of Mars has become 10,000 Mearthens. John and Matt have their families and children. Over the past few years, they have become even closer. They have to live several days, because in their bodies the process of aging begins. The first to die is Matt. Following him, the difference in the hour, John dies. His last words are: “Together we started and we will end together”.

Mearthens never forget their heroes. When twins are born in families, they are called Jonathan and Matthew, in honor of the brave leaders. Will they ever return to the Earth? No one knows the answer. But it has become absolutely clear that Mearthens will not make mistakes of the past. The inhabitants value their planet Mars and carefully care about its resources, nature and the wild life.

P.s. The same situation can happen with us at any time.