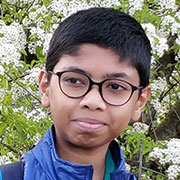 “Lie Trouble” by Akshaj Vinod Nair, India, is the Highly Commended story in the senior category of the first biannual Short Story Contest 2018.

Suresh was extremely scared. He could not think of anything. For three days his teacher Miss Geeta had reminded him to hand in his English project, but somehow he had forgotten. Today, he had forgotten it again, despite sitting up all night and doing it.

Suresh was extremely scared His project was fully done, with all the information about the poems needed, decorated with ribbons all around, but what is the point? He had forgotten to take it.

As the bus arrived at the school main gate, he started sweating. He prayed to God to stop Miss Geeta from entering the school premises. But he was sure now that his prayers were not going to be answered as he saw the teacher walk out of the bus and look in his direction. Suresh did what everyone does and ducked down waiting for his horror to walk away. Then he decided that he would pretend to be sick, to escape the teacher’s anger.

As he proceeded to the class he stopped near the sick room, and made a drowsy face. However, as he turned to open the door, he heard a voice from the room. Concentrating even more he realized that it belonged to none other than Miss Geeta. He was now freaking, this teacher somehow had made it a point that she would be everywhere Suresh went. He was utterly disappointed and anxious. He hurried back to his class but was unable to pay attention. He tried to concentrate but all he could hear was the conversation between his parents and the teacher or his parents announcing to cut his pocket money or announcing that he would be grounded. His thoughts were interrupted when the class door opened and in came Miss Geeta. ‘What, seriously this teacher is surely behind me and would not stop at anything’ thought Suresh. He quickly took permission and took off to the washroom - his only sanctuary at the moment.

As he reached the washroom he found Raju who was washing his hands.

“What is the problem Suresh? Why are you acting so odd and petrified?”

Suresh explained the whole situation to Raju who understood the problem and suggested that he must face his problem rather than hide. Suresh after much thought went to the class slowly. But once again to his horror there stood the teacher.

“Suresh where is your homework?” Miss Geeta asked in a quiet but scary voice.

“Ma’am I have it I ….. will just show you,” replied Suresh cursing himself for lying and trapping himself in the web of lies.

“Then give it right now”

“How do you know that I had gone to the sick room?”

“Ma’am actually I went there myself as I had a headache and I am still having it, so can I go there a.. now “

“Wait, till I come back with your project”

Suresh was now at a loss, he knew that today was not one of his days and he was sure to be scolded for not submitting the project as well as lying to the teacher.

But as usual on this day filled with surprises. Miss Geeta returned with the homework in hand and a smile on her face.

“Suresh though you submit your work late it is always the best but I do not know why you are so nervous.”

Suresh did not understand what this lady was talking all about.

Suresh was ashamed of himself and he would not lie anymore. Well, the next the day he forgot his English report and was scolded once again.

But he is sure to improve.