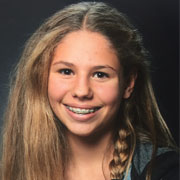 “Just One Touch Of Kindness” by Zara Moretto, France, is the Third Prize winning story in the senior category of the first biannual Short Story Contest 2018.

Just One Touch Of Kindness

Eko floated aimlessly at the surface of the dank pool. It hurt Amy to look at him, the wreck of what once must have been a beautiful killer whale. Why she had ever decided to become a trainer at a marine park she was never fully sure. She had been young, up to taking risks, she would say to herself. She once spent a year studying wild whales abroad and when she had returned to the marine park she had suddenly found herself noticing more and more the difference between wild and captive whales. It wasn’t the imprisoned whales’ raked skins or bent dorsal fins, it was something much more shocking. The light in their eyes.

Wild whales were filled with such joy and freedom, it invaded their eyes and made them shine through the impenetrable darkness of the sea but it seemed like people had blown the life out of the captive whales as easily as blowing out a candle. Eko was the worst of them all, the other orcas would pick on him, he was too nervous to do shows and he would never cooperate. Amy couldn’t blame him, he was stuck in a cement pool his entire life and probably spent most of it dreaming he was back with his family, leaping through the waves, swimming freely never hitting a cement wall, never finding himself short of space to live in.

Amy would often find herself drowning in thoughts about poor Eko, she felt so helpless, she didn’t want to leave the park because it would mean leaving the whale alone, surrounded on all sides by an almost suffocating darkness. She felt a bump against her leg and was jolted out of her aimless train of thought by Eko. He was rubbing his nose against her leg, as friendly as a dog. She laughed despite the pain and stroked the killer whale’s head. “What is it Eko?” she asked, but before she could finish her sentence a ruddy faced man stormed up to her. “Stop playing with the whale, we have to do his medical tests, come on.” He said gruffly. “You’ll be good won’t you.” She whispered under her breath before leaving the whale and walking over to the group of trainers already preparing the nets to capture Eko.

Amy hated medical tests, and she had a suspicion she was not the only one. Ivy, a dark haired young trainer seemed to have the same look of horror on her face as Amy when they had to do these procedures. They needed to trap Eko into a smaller pool and sling the nets around him so they could carry out the proper tests. The killer whale was afraid, he knew what was coming, he shied away, hit the water with his tail and made an earsplitting series of loud, frightened clicks. It took the trainers an hour to get him into the medical pool and a further half hour to get him into the net. It would have taken a lot less if the senior trainers had let Amy try to coax the petrified Eko but they insisted on herding him in with nets. By the time they had got him in Eko had lost it. He was thrashing around in the water, unable to control himself. Amy was looking panicked and even the senior trainers looked as though they were ready to give up and then it happened.

With all the strength he had left the massive orca leapt out of the water and came cascading back down onto the net, ripping it cleanly in two. In the panic and confusion that ensued Eko slipped out and back into the corner of his tank, ignoring the yells and curses coming from the men. Amy was secretly glad that Eko had got away but was afraid of what would be coming next.

Hours later when the sun had dipped beneath the horizon and the moon shone on the water, soft silvery light bouncing off of it, Amy knelt down by the pool side, legs dangling in the water. She felt rather than saw the killer whale approach her. “They’re sending you away Eko.” Her eyes glistened with unshed tears. “You’ve finally done it, they’ve finally had enough of you.” She gently stroked his head and pressed her forehead against his, gazing into his eyes, willing some life to shine within them, willing for the orca to see some hope. But the eyes remained as lifeless as always. A tear slid down Amy’s face and fell onto Eko’s head. “Maybe I can’t help you.” She shuddered, the orca seemed to whine like an upset dog. “I’m sorry.” Amy breathed before getting up, stealing one last glance at the orca and turning away. Little did she know that just that one touch of kindness was the only reason Eko continued living as long as he did.