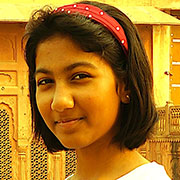 “It Fell In A Storm” by Ishana Verma, India, is the Highly Commended story in the senior category of the first biannual Short Story Contest 2018.

It Fell In A Storm

I love the power of a storm. It is one of the most spectacular shows of nature and when it passes, it leaves behind a light that is nothing short of magnificent. That was why I went for a walk after the storm. The dark skies were enchanting, the clear air smelled wonderful, the leaves on the trees seemed freshly washed and the water drops on them looked like they were just about to fall but they didn’t - they just hung there, shining like little Christmas lights, making the trees look like Christmas trees.

In the middle of my walk, I saw some children running away from an angry old man. He was screaming and shouting at them, and the two boys and a little girl scampered across the street like rabbits, dragging a bag behind them. I didn’t know what the matter was and didn’t care to investigate. I kept walking and watched the kids disappear into a lane.

A few minutes later, I saw the children again. They were collecting mangoes that had fallen on the streets from the trees in the storm. I understood now why the man had been angry at them: they were probably after the mangoes that had fallen from his tree. I watched the children as they went from one mango tree to another. One of the kids soon realized that I was observing them. He got a little nervous for a moment but then he decided to ignore me and kept picking the mangoes off the street. I walked up to them and asked, ‘What are you doing?’

Startled, the two boys said nothing but the little girl said elatedly, ‘We are collecting mangoes.’

The two boys, probably her elder brothers, didn’t approve of her talking to me. ‘Why do you ask? Are you going to tell the owners?’ queried one of the boys.

‘No, why would I do that? You are collecting mangoes that have fallen on the street. It’s not like you are stealing them from somebody’s tree,’ I replied, hoping that siding with them might break the ice. It did.

‘Try telling that to the old man who just chased us,’ said the other boy.

I smiled and they kept collecting the mangoes.

Not all the mangoes were in good shape. After all, they had fallen from the trees on to the concrete. Some of them were bruised, some had cracked open and others had split right into two. The children inspected each mango they found. If it was any good, they put it in their bag; if not, they threw it away and moved on to the next street.

I was also walking along with them, though I maintained a healthy distance so that nobody would associate me with them. I was worried that if another old man came out of his house and chased them, the children would run away quickly – but where would that leave me? It would be rather embarrassing for me if I were caught as one of their associates. So I was careful not to get so close that I might not plausibly deny any involvement with the children if accosted. Meanwhile, I realized that the kids had started trusting me; they knew that I wouldn’t tell on them because if I had wanted to, I would have done so already.

Time passed and as we went from street to street, I found myself entrusted with the role of the lookout. I didn’t know when this assignment happened but I was happy to go along with the idea, as long as it didn’t get me into trouble. I must admit that we had some close calls and I secretly enjoyed the little element of danger.

I looked at their bag and realized that they had more than enough for themselves and yet, they were searching for more mangoes. I noticed another strange thing – they hadn’t eaten even a single mango from the bag.

‘Don’t you think you have enough mangoes for yourselves?’ I asked.

They looked at me but said nothing. After a moment, the little girl said, ‘We are not collecting them for ourselves; we are going to sell them.’

One of the older brothers promptly elbowed her. It was evident that they did not want to disclose their plan to me.

After a while, when the boys went a little further to pick the mangoes, the little girl walked up to me slowly and told me their secret.

‘We are going to sell these mangoes so that we can buy gift for our mother. Today is her birthday. We spent all morning thinking about what we could give her, but we had no answer until the storm hit. Then one of my brothers came up with the idea of picking up the fallen mangoes and selling them to get the money for her gift.’

I was impressed by the diligence of the kids to show their mother how much they loved her. The little girl went back to join her brothers to inspect and pick up the mangoes, and I stood there processing the information I had just received.

They were young children. The oldest was probably ten years old and the younger boy maybe eight; the little girl couldn’t be more than six. This was not the age to collect mangoes to sell in the market to earn money to buy their mother a birthday gift – but what could I do? If I offered them money, that would be insulting – not only to them but also to their cause. So I did nothing and simply walked along.

After some more streets and a lot more mangoes, the children decided that they had enough and went towards the market. I had been with them till now in their journey. So I decided to stay a little longer and watch the culmination of their efforts.

They decided to set up a shop on the street side on the way to the market. I watched them as they put down the bag on the side of the road, poured the contents on to the grass, neatly divided the mangoes according to their quality and size and then stacked them carefully on the bag. It was an odd mix and thus their prices were low but still, people bargained with them. I wondered how people could haggle with such small children. I felt disgusted and sorry for the people who bargained, but not for the children. In my eyes, the children were real heroes.

The fruits sold quite quickly due to their cheap price. Only a few mangoes remained now – they were so few that people didn’t even stop to look at them. The kids were quite anxious to sell the last of their stock as soon as possible, understandably so because they needed the money to buy the gift for their mother and the day was almost boarding on evening.

I decided to step forward and offered to buy them all. ‘Okay, I need some mangoes too. How much are these?’

The little girl smiled at me and the boys started calculating. Then they said, ‘Eight rupees.’

I took out a ten-rupee note and gave it to them. Instantly, they started to fumble in their bag to give me change.

‘Don’t worry, keep the change, ‘I said, but they refused to listen to me and gave me a two-rupee coin.

‘So, have you decided what gift you want to buy for your mother?’ I asked.

The boys glared at their sister – it had been their secret and she hadn’t been able to keep it to herself. At that moment, I felt like I had betrayed her trust, it was awkward.

Finally, one of the boys said, ‘We haven’t decided yet. We will count the money and then see what we can afford.’

They poured out all their money on the bag and counted it; it was a little over a hundred rupees. By the looks they exchanged, it was obviously more than they had expected. Then deliberations started on what they should buy. The three of them didn’t make any meaningful progress for a long time, until the little girl spotted an umbrella salesman. He was wandering on the rain-soaked streets, looking for his next client.

‘Ma could use an umbrella. She always coming home soaking wet,’ suggested the little girl. Her brothers agreed.

I stood there watching them as they ran towards the umbrella salesman and started sifting through different patterns and colors, but the little girl was fixated on a beautiful white umbrella with red flowers all over it.

She pointed to it and said, ‘I want that one.’

But that particular umbrella was out of their price range. No matter how much the umbrella salesman tried to explain that to her, she wouldn’t understand. Then her brothers joined in and tried their best to convince her otherwise, but how does one argue with a six-year-old child who is on the verge of tears?

I couldn’t just stand and watch any more. The children were facing the umbrella salesman and had their backs towards me. I pulled out a fifty-rupee note from my pocket and waved it at the umbrella salesman. He glanced at me. I placed my finger on my lips and gestured for him to be quite too. He understood what I meant. He gave them the umbrella and took whatever money they gave him.

As the children went on their way with their gift, the umbrella salesman slowly walked up to me, took the fifty-rupee note from me and walked away.

I know that many would call what I did ‘charity’, but it wasn’t. I think it was the children who were charitable to me. What is the value of money anyway but the paper it is printed on? What really gives money its value is the need that someone has for it. For me, the value of a fifty-rupee note is a chocolate bar or maybe a bag of chips; but to those kids, that same fifty-rupee note was a way to show their mother the appreciation they had for her love and care. They had just increased the value of my fifty-rupee note a million fold, for who knows how their mother might have reacted when she got her birthday gift? She might have cried, and it would be sacrilege to put a price on those tears of joy.

After that day, I looked for those children whenever I walked past the market, hoping never to see them selling fruits by the side of the road again.

I never saw them again.