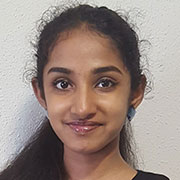 “Hirateh” by Devika Menon, Singapore, is the Highly Commended story in the senior category of the first biannual Short Story Contest 2018.

Her hair turned to icicles.

Her knuckles were white with anger.

Her tears kissed the soil on the last day.

She had stories to tell.

Everyone has a past here.

Words and faces she couldn’t recognize flooded her mind.

‘How are you doing? Remember anything yet?’

She strained to speak. Her throat was dry and thoughts a whirlwind.

She was in the eye of a hurricane. The thoughts came crashing at her. Her mind collapsed with the weight of memories.

‘I.. I think I do. But I don’t understand. There was.. it was cold. And it was the last day of something. I cried. Someone was angry and… Someone promised. That’s……that’s it.’

‘That’s okay, dear. That’s good for today. Don’t strain yourself too much. You will remember everything soon.’ Assured the doctor before turning away.

In the hallways, the hospital staff were engaged in discovering where this girl must be from. She was admitted last week by a bystander with multiple injuries to her brain. She has partial amnesia.

Somewhere miles away, the hallways of the school echoed with his roaring laughter.

I look like a mess. She thought to herself as she stared into the mirror at the girl she used to be. Something struck her as the doctor turned away. Someone…. Someone left before I did. Someone left and it destroyed me.

It played like a movie in her head and it became clearer to her as each moment passed. There was a crowd. But her mind’s eye was focused on someone. Someone was leaving. She didn’t know who this was, who this person meant to her, but he left. She was so tired of being so unaware of who she was, of who she is, and in that moment, she decided that no matter what, she would figure out the past and get back home.

The hospital staff were deranged when the patient with partial amnesia asked for a sketch board and pencils. Nevertheless, that night the patient had what she wanted.

She started from scratch. She sketched every single detail that appeared in her dreams, every face, every place. First, the girl in the cold. It was her. As she sketched further details, things seemed to get clearer in her memory. It was cold when she left, or when he left. She couldn’t be certain. But something happened that day, under a frozen tree. She drew all of them.

She sketched the boy with white knuckles, enraged by something. She felt protected, yet offended. She felt anger, sprouting from the depths of her heart. Suppressing this anger, she discovered something else. She left. But only because someone else did. Stemming from her feeling of hopelessness was empowerment and a decision to control her reaction. And the only way she could liberate herself from whoever this was, was by leaving him.

She sketched herself. She was crying. But for something lost, something ending. There was no boy at this moment. Nothing about him. This was something bigger, something more important. She left some important place when she left him. She left parts of her self in that place, on the cold day, when something happened.

She sketched two hands- the promise. Someone broke it. But who it was remained unclear.

‘Have your dinner, Katy.’ Said the nurse, interrupting her thoughts.

She pulled out the first sketch and gestured it to the nurse. ‘Do you know where this is?’

‘Everywhere its freezing in December dear! It looks like this is everywhere now.’ She chuckled.

‘But… what about the houses? Do they look familiar? Any place nearby?’

‘Even if there was, you would take an entire month before you recovered and God knows how long until you remember everything. Its impossible to find this place dear. Here’s your dinner and here are your medicines.’

She smiled politely and took the medicines.

Little did the nurse know, that next morning she would enter her room to only find an empty bed.

It was freezing cold outside. But her robes and jackets from the hospital and some food proved to be life-savers. Just as the Sun rose the next morning, she made her way to street 21 and knocked on the first door. Greeted by a lady in her mid-30s, she asked, ‘Do you know this place?’ holding out the sheet of paper. The woman replied without hesitation ‘No. Not a clue’.

‘Okay thank you’ she said. She left disappointed from her first chance of finding home.

The last door. Her knock was answered by a man in his 40s, grumpy on being woken up on a cold morning. She held out the drawing to him reflexively and asked, ‘Sir, do you know where this place is?’

The man fumbled for his glasses and tried hard to focus on the drawing. His face lit up with recognition and for a moment Katy almost thought she found home.

‘Oh dear! What are you doing so far away from this place! This place is miles away from here. I used to live there. Come on in, I’ll get you a cup of coffee.

Grateful for the warm coffee, she inquired,’ Sir, could you tell me where this place is?’

For the next few minutes, the man spent explaining a place near a school and she took down every detail. ‘Thank you so much Sir. I hope you have a good day.’ She said before leaving.

On Street 21, on a freezing morning, a girl started her journey back home.