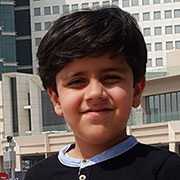 “Everyone Needs a Friend” by Mir Faraz, UAE, is the Highly Commended story in the sub-junior category of the first biannual Short Story Contest 2018.

Everyone Needs a Friend

Anna had always been a happy little girl. She was the only child who was the apple of her parents’ eyes. Her parents doted on her. Theirs’s was a cozy little family. Anna had it all except one thing she always wanted- a pet.

Yes, Anna loved animals. She would spend hours gazing at the adorable rabbits, tiny hamsters and vibrant fishes in the display window of the pet shop on her way to school. And there was one particular animal which really fascinated her no end. It was a canary- actually it looked more like a little chick, all yellow and cute beyond any words.

One day when Anna was returning from school, she noticed that the canary was gone from the window. Her heart sank. She had developed an affinity for the little creature and now that it was not there, she felt a void in her heart. Despondent, she walked towards her home. As she rang the bell, she heard a chirping sound coming from inside. As her mother opened the door, she said in a sing-song voice-

“Surprise!!!! Look who’s here!” And she moved to reveal a shiny yellow canary in a cage. She continued, “Anna, I’ve seen you stop at the pet shop so many times and looking at this little fellow. I just had to get him home. He’s waiting for a name now.”

Anna was beyond herself now. She squealed in delight, “Mom! Thank you so much! Hmm… He’s bright like a flashing bolt of light, so I’m going to call him Flash!”

“That’s such a wonderful name, Anna. Flash will be so happy to have you as a friend.”

“And I’m so happy to have him. Everyone needs a friend!” Anna said happily.

Flash brought more joy to Anna’s family than they could have ever imagined. Many months passed and now Flash was a member of Anna’s family. Everyone loved him for the bundle of cuteness that he was. Anna even trained him to perch up on her finger and then she would walk around her room. He sang the sweetest songs all day which resonated throughout the house.

And then one day, the singing stopped. The house was disturbingly quiet now. Flash just sat in the corner of his cage sad, looking unwell and lost. Anna and her family took him to several veterinary doctors. He was given medicines many times over, but nothing worked. His quietness reflected in Anna’s eyes as well. It was as if she was sick too. One day as Anna was sitting near Flash’s cage, tears swimming in her eyes, her mother came and sat next to her.

And they talked. Of beaches and rains. Of sunshine and flowers. Of cookies and cupcakes. Of Flash and his songs. Anna really felt a lot better after having a casual chat with her mother. And then a thought struck her-

“Mum, I feel so much better already. Do you think Flash will too if he has someone to talk to? Someone of his own kind, someone who understands what he says. How about we get another canary?”

Anna’s mum was not sure about the idea, but she thought that it would bring a smile on Anna’s face hence it was worth it. In the evening, they walked to the pet shop and got another canary. Anna named this one Twitter.

After reaching home, she kept Twitter’s cage right next to Flash’s. The pet shop owner had advised not to keep the birds in the same cage for the fear of Twitter getting Flash’s infection. Twitter was a feisty little bird who loved hopping around. She tried to talk to Flash but he did not respond. Anna was losing hope now. Will her Flash not feel better ever?

But then miracles happen when you expect them the least. One day when she woke up she heard a harmony of tweets and chirps. As she walked towards the cages she realized it was Flash and Twitter talking to each other. Weeks went by and with every passing day, Flash got better. And… he was singing again.

The doctor said that he was fine now, so Anna shifted both the birds to one cage. And that’s how they lived after that.

One day as Anna sat watching them play merrily, she felt a hand on her shoulder. It was her mother, her face beaming. She said-

“You were right Anna. Everyone needs a friend.”