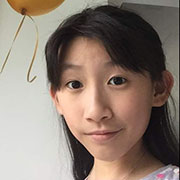 She sat at the window silt and daydreamed about her week.

She was in a new city, school term and a new life. Recently moved was Emelia Harley, singer and basket-baller, going to an all-girls school, West Tulips. Her wavy butter-scotch-champagne hair fluttered around her tanned face as she cycled to school on her road bike.

The view of the school was breathtaking. There was a greenhouse, a grand driveway, a vast field and in the middle of the dormitory and the classroom buildings was a tall tower.

She chained her bike to the railings after skidding to a stop. There were loads of students in the entrance with their friends, teachers or parents.

By the end of the unpacking, eating and farewells, Emelia had made loads of friends. All the staff and students liked her because of her intelligent, amusing and valorous character. Her new classmates were amazing and one of them asked her to audition for the basketball team!

The next day, Rina, a bookworm and Sammy, the head girl got their wallets stolen. Jennifer Mayors, a quite nosy but nice girl was determined to find the thief. But the weird thing was Rina eventually found her wallet back and there wasn’t anything inside except for her student card. ‘So clearly the thief was only after money,’ thought Jennifer.

Well that night, Emelia heard a slight sound. The night was breezy and pitch-black. The trees looked like shadows dancing below a full moon.

Emelia saw a shadow of a girl with a torchlight walking out of the dormitory and ungracefully tumbled out of bed once the door closed. She dressed speedily and followed the mysterious girl out all the way to the sweet shop.

But, Emelia wasn’t the only one awake that night…

Jennifer, upon hearing Emelia’s fall made sure she left before scrambling out of bed and grabbing her phone with her.

She followed Emelia, who was following another girl. “The sweet shop? What would Emelia be doing here in the middle of the night?” Jennifer mumbled to herself before crouching down to hide in a shaggy, leafy bush by the side of the shop. She had lost Emelia, much to her frustration, but then saw a light from a torch click on in the foggy window of the sweet shop. “Surely that must be Emelia,” Jennifer thought. She moved closer to the shop.

Meanwhile, Emelia also noticed the light being switched on. She felt quite indecisive sneaking out of school after curfew but being too curious, she hid by the side and peeked through the door. She couldn’t see the girl inside but she could hear the muffled sounds of keys jingling and paper rustling. Then, she saw a shadow coming towards her. The person saw her and started to scream, but Emelia dragged the person to the side and covered her mouth.

“Who are you?” she whispered. “What are you doing in the middle of the night, Emelia?” whisper-shouted the person. “Wait, are you Jennifer? Uh, I saw a girl going here so I followed her,” answered Emelia”. “Are you filming this?” “Yes, it’s what a good detective would do,” replied Jennifer.

Suddenly the rustling from the shop stopped and they heard footsteps approaching. Jennifer scurried away from sight but Emelia was too late. The girl, shocked to see another person obviously spying on her, took a stick and struck Emelia hard on the head. “You have strong hands,” said Emelia drowsily before fainting.

Dawn arrived and Emelia woke up. She groaned and rubbed her head. There was blood on the floor and a raw scar across her forehead. Jennifer was next to her sleeping. Emelia woke her up and hid the wound with her ruffled hair and limped back to school.

Emelia and Jennifer planned to go to the headmaster after breakfast. Emelia forgot to bring down her book and returned to the dormitory with Jennifer. She accidently bumped into Rina, cried an apology and helped her to pick up an opened box. Inside was loads of money and Sammy’s wallet. “It was you…you stole the money not just from the students but also the sweet shop last night!! And you…hit Emelia with a bat!” exclaimed Jennifer. “What proof do you have?” teased Rina. “Jennifer had it all captured in her phone last night!” Emelia said sarcastically.

They showed the video and Rina’s box of money to Headmistress Hale as evidence for the stolen money. Finally, Rina got expelled and Emelia made a new best-friend in Jennifer.