Story Contest 2018 #1 Results » Highly Commended - Do you believe in destiny? 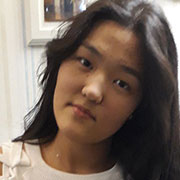 “Do you believe in destiny? ” by Ainabek Rukhsana, Kazakhstan, is the Highly Commended story in the senior category of the first biannual Short Story Contest 2018.

Do you believe in destiny?

The same dream he sees all the time. A girl… She appears in this dream taking him into her world. She sits at the table around her lilies. She draws flowers on paper without noticing his presence. At this time, he could admire her without being noticed. She's beautiful. She has light brown hair,a small nose, slightly puffy lips, clear eyes thatradiate a magnificent light. He mightstay here forever, but the silence is broken by the crackling of a pencil, already broken. She looks up at him and smiles. She takes out the box under the table and gives it to him. When he tries to open it, the dream ends. He constantly wakes up at this moment and does not know what this mysterious girl has given as a present to him, a girl he has never seen before, a girl of his dream.

He is studying in high school. Every day he has to get up at 7 am and come to this hateful place. He believes that life at school deprives pupils of their individuality and motivation. Another Monday, then again and again, going through his gray and tedious routine.

His main goal? It is the most valuable thing for him. All that's left in him. His most precious treasure. He wants to be a photographer. Capture every moment. He loves the sky and often takes pictures of beautiful sunsets. But there are always people who blame, hinder and force him to quit it.. But he stubbornly goes on. He walks slowly along the long-familiar travail. In the headphones his favorite song is on, though it's a little distracting from everything that's happening around him. His escape from the reality…

He comes to school and goes to his class. His first lesson will be history. He doesn’t have any friends. And it is okay for him that no one even greets him. Before the beginning of the lesson, the head teacher comes to the classroom. He introduces a new student.

“Hello, my name is Wendy. From now on I will study with you. Nice to meet you,” she smiles in a friendly way.

“She is… It is her!!!” He is speechless. He is so surprised that he thinks that he is in his dream. It is that girl from his dream. He does not take his surprised look from her. And she cannot help noticing the gaze of this guy. She has a feeling that they were old friends.

The whole lesson he spends dreaming and thinking. How is this possible? Maybe he's still asleep? He has pinched himself so severely that probably there will be a bruise on his arm. No. It's not a dream. But he still cannot believe it. The features of the face, eyes and even her smile... Everything was absolutely similar to his dream. It was definitely her. Maybe it's destiny? But he does not believe in it or he thought so until he met her. Well, who knows?

For today their joint lesson is only history. For the whole day he does not dare to talk to her. And what might he say to her? He is not a very sociable and open person. But at least he knows her name. Wendy…

He is already on his way home, but he notices her walking along the park. She also sees him. He stops without daring to step forward. Wendy notices something familiar in his face. She still has the feeling that she has known him for several years. She decides to find out why and how.

He stands in bewilderment and cannot understand where this girl is going. But when she stops right in front of him, he realizes that she is talking to him.

“My name is Wendy,” she smiles brightly and openly.

“Oh I know. You are the brand-new student from history class.”

“Oh yes, you remember me. But I still don’t know your name.”

“I have a feeling that we have seen each other before. Have we met anywhere by chance? “

He thinks that she might know something about his dreams and decides to tell her the truth.

“It can sound really ridiculous and even weird, but it’s the truth. I saw you in my dreams.”

He looks at her to expect her reaction.

“You are joking. That’s impossible!”

“No I’m not joking. I’m telling the truth. I see the same dream every day.”

He tells her his dream. She listens to his story with much interest. Strange as it may sound, but she trusts his words because she believes in destiny.Сan destiny really exist? And when he mentions the little box, she asks him to describe it in detail.

“It is a wooden octagonal casket with a key slot and with engraved tulips on the lid.”

She can’t believe her ears. He has just described her casket that lies in her room under the table. By her surprised look, one can guess that she knows something about this box.

“Wendy? Do you have that box?”

For both of them it was something amazing and thrilling. If someone could hear their conversation, they might think that they are just crazy. But they believe each other. And this is the most important thing…

They did not even notice how time quickly passes. During this time, they get to know each other more closely. He learns that she likes playing the guitar and reads different kinds of books. She has found out that he likes to take photos and always carries his camera with him. He shows her some pictures. She doesn’t want to tell him what she has in her box at home. She says she will bring the box tomorrow with her and he will finally be able to see this mysterious box. They agree to meet tomorrow in this park after school. They say goodbye to each other and go home.

He wakes up with a smile on his face. It's probably the very first day when he's so excited to go to school. It's all because of her. She's not like others. She is different. She always smiles.

They meet at the school entrance. She waves cheerfully at him in greeting. This little thing makes him soar like a bird. Today a joint lesson is biology. She advises him to try making friends. So today he does a laboratory experiment with Adam, his classmate. They start talking and he finds out that Adam is a fan of interesting films and has invited him to discuss one new film part about "Avengers". Dean realizes that making friends is not as hard as he thought.

Dean and Wendy meet in the park and sit down on the bench. She takes box out of her bag. The casket is exactly the same as it was described by Dean. She gives him this casket. She really wants to see his reaction when he opens the casket. He carefully lifts the lid of the box. There is an old picture of eclipse and an old leather bookmark.

“This picture was taken by my grandfather. He liked taking photos too. And this bookmark was used by my grandmother. She read a lot of books. These things remind me of them. Grandmother and grandfather remind me of us. We are very similar to them. And they loved each other so much.”

She looked at the sky and asked quietly:

-Do you believe in destiny?