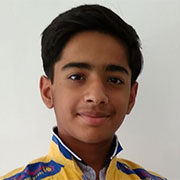 “Battle Of The Brains” by Daksh Varshney, India, is the Highly Commended story in the senior category of the first biannual Short Story Contest 2018.

Battle Of The Brains

Virat was a quiet, young boy who studied in class IX in a prestigious school in Delhi. Diminutive and lean, with horn-rimmed glasses, he exuded an air of studiousness which made him a respected member of his class. He had combined intelligence with diligence, and his hard work had certainly paid off because ever since he joined the school he had consistently stood first. Anybody who joined his class and aimed to topple him was doomed to disappointment. Virat took his studies so seriously that he never had much time for games, reading and other things. To him, they were a waste of time. Most of his class-mates were very impressed with him, specially his best friend, Adesh, who always found it difficult to do the simplest of sums! Virat was the teachers’ favourite and his parents’ pet. Life was quite simply heaven.

Into this paradise, however, soon came a serpent in the guise of a new boy, Karan. He was everything Virat as not. Although just fourteen years old, he stood five eight inches in his socks. He was also athletic with bulging biceps. His prowess in sports was displayed on the first day when he won the 400-metre race very easily.

Virat was impressed. Being poor at sports, he could be generous with someone who excelled at it. After all, Virat’s forte was studies and not sports.

After some time, Karan won the big Nehru Memorial Trophy. Virat knew that his turn would come when he would win a prize for standing first in the entire class IX.

But, the first time Karan got higher marks than Virat, he convinced that Karan had cheated. He implied as much to his friends, Adesh, who gossiped about it to some friends. Nobody, however, believed it anymore when Karan solved the most difficult sum that Virat and class teacher both unable to solve.

“My time will come,” Virat chanted to himself

He thought it when the annual essay competition was announced. The topic was announced beforehand but the children had to write the essay in classroom. Virat wrote excellent essays and had won several cups for them. When he turned in his essay he was sure he would win.

The teacher came next day and she said, “I have read all the entries, in my opinion Karan’s will, undoubtedly be the best.”

Virat was stunned into silence. The class teacher had not even discussed the possibility of his essay being selected!

When he walked to the Staff Room on the teacher’s desk, he saw the essay competition entries. He had taken Karan’s essay and had torn it into bits. Then guilt assailed him and he overcame with fear. What if anyone had seen him? He quickly went to the toilet and flushed them. He sagged with relief and was rather pale when he re-entered the classroom.

The next day the teacher discovered the loss of the essay and no amount of searching could help retrieve it. “In case the essay is not found, I will not send any entry from this class,” threatened the teacher.

Karan found a solution to the problem. He said he could rewrite the entire essay. Indeed, soon he had done it.

“How did you manage to do it?” marvelled the teacher.

“I guess I am lucky, Ma’am,” Karan said modestly. “I have a photographic memory.”

When Karan walked away with the trophy which Virat thought rightly belonged to him, he could no longer contain his jealousy.

A week before the examination, when he spotted Karan’s familiar red school bag, something snapped within him. He took out all his notes and hid them.

Karan discovered the loss of his bag and a hue and cry was raised. The bag was eventually found in the bathroom but the exercise books were missing. Karan seemed to be in tears.

The next day onwards Karan stopped coming to school. Virat thought. “Let us see how his photographic memory comes to his rescue” When the next day too he did not come, Virat started feeling nervous he had visions of Karan wasting away in grief, unable to give the class IX exam and dying. He did not want Karan to die.

Virat decided to go to Karan’s house and take along his notes. But he could go only if his parents dropped him there. That meant telling his parents the truth as it is necessary to save Karan’s life.

When he told his parents about it, they heard him in silence and merely said, “Let us go and see Karan first.”

When they went to Karan’s house, he was nowhere to be seen. His parents were at home.

“My son has something to say to you,” said Virat’s father. Virat blurted out the whole truth, of how he had felt that Karan had dethroned him and how he had sought his petty revenge. “Where is Karan?” he asked timidly, fearing that he would be in bed with raging fever or worse.

Just then Karan walked into room looking pale and tired. Virat realized that Karan must have realized all along that he was the culprit. Even at this moment he said, “It must have taken real courage to confess. I doubt if I could have done it.”

“How do you excel in many activities?” asked Virat’s mother.

“I believe there is a time for study and a time to play. I make sure Karan does both,” said his mother.

He thought how surprised the class would be when they walked to the examination hall not as enemies but as friends. The protest of standing second had lost its threat. Instead the thought of pitting his wits against a worthy opponent had become a challenge!

Moral: Don’t be jealous from other’s success, just do your best. Never be overconfident that you are the best because it is the best thing to make you a failure.