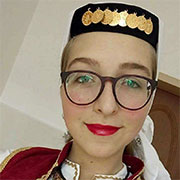 “Awake or Dreaming” by Erna Fajkovic, Bosnia and Herzegovina, is the Highly Commended story in the senior category of the first biannual Short Story Contest 2018.

Taking a few cautious steps towards the hospital door, he stumbled and struggled- he was almost there though. Just a little more and he would finally be free. His breathing had already turned heavy and labored, it was his last few seconds in this hell. He called it home for the past eleven years- how could he not be nervous?

The sliding doors pushed open revealing a blinding light, as he let out a deep sigh of relief. It shone so bright, so he almost couldn't believe it. He had stayed in the same hospital room for the past one decade, repeating the same, agonizing actions daily. But this event was once in a lifetime, this had never happened before. Never could he ever imagine getting away. He didn't even know how he got to this hospital, truth be told, he was a normal person, with a normal family and had a normal life. Until he woke up one day in this devastating hospital room with bland beige walls and white curtains covering the windows. The same nurse would walk in every day and give him antibiotics, asking him some question in a foreign language he barely understood. A lazy smile graced his pale face at the thought of escape, the smile lines around his lips only getting more noticeable from the mere action.

He moved towards the light with his heavy arm but as soon as he was close to making contact, something pulled him back. There he laid, confused and terrified, his breathing getting more and more shallow by the minute. What was happening? He was so close to the end, so close to freedom. Looking up with teary eyes, he picked himself up slowly and made his way towards the door once more. He couldn't give up now, not yet. The shining light wasn't about to slip from under his fingers, the light that needed to guide him home. His sore throat burning as he desperately yelled over and over again

"Please! I need to go home! Let me go home!" he cried, his knees bucking and almost giving out. He choked on the salty tears as they streamed down his face, the light was getting dimmer as he approached it. He stopped dead in his tracks, sadness engulfed him to the point where he couldn't move a muscle. He groaned and wailed in despair-but no one heard. There was no one in this deadbeat hospital. His eyes screwed shut as he wrapped his arms around his tired body. The pain wracking his heart shook throughout his whole, numb body. He was numb, numb and that's it. In his mind he felt numb, his heart, his soul, his mental state slowly but surely turning to insanity. His eyes closed and his trembling body fell lifelessly to the floor.

Yet again he was back in the same, dull, beige room. He groaned loudly, looking around. He was still in the same, dotted hospital gown as usual. Things seemed normal. The television screen in front of his bed showed exactly the same program that it does usually every day. Everything was just the same as any other regular day. He looked around to spot anything different but nothing seemed too out of the ordinary. A knock sounded on the door suddenly, snapping Jackson out of his weary daze. His eyes adverted to the door as it opened to reveal his doctor. This was odd, his doctor never came by, the usual routine was his nurse coming by to give him some antibiotics, then asking him how he was to which he would just nod, then she would proceed to bring him food and a bottle of water and that was about it. As the doctor walked in, another one followed. Jackson sat up quickly, confused as to what was happening this very moment. He rubbed his eyes as if to make sure that what he was seeing was indeed real and not just some sort of dream.

The doctor was young, maybe around his thirties. He stood tall, wearing his white coat with pride, a small smile adorning his wrinkle-less face. The other person beside him seemed different, he was older, and Jackson could only tell by his grey hair. Unlike the young doctor beside him, he wore blue scrubs, making it seems as he had just stepped out of some operation.

The doctors chatted amongst themselves in the unknown language for a short while before one of them asked Jackson how he was feeling. He didn't answer- he only looked at the man. It wasn't that he didn't want to answer, he just physically couldn't. His mind went blank as he stared at the person before him. "I-i" he stuttered, it was like a cat had swallowed his tongue at the exact most important moment. Who knew when they were going to come back? Maybe never, maybe it was a bad thing-them being here. Maybe they were here to finally pronounce him crazy for some reason, even if he was completely and utterly healthy. Or were they here just to play some sickly game of theirs?

There were too many questions overwhelming him, different thoughts were buzzing through his mind. Who the heck were they? Of course they were doctors but they seemed so unreal and fake, almost like this was some sort of illusion his own wicked mind was playing to cope with his mental instability. Whatever it might have been, he didn't want to deal with it. He slowly closed his eyes and leaned back down to lay amongst the soft, warm bedding. He screwed his eyes shut, hoping the doctors would disappear. When he finally snapped them open, he looked to his side to see them still present. He sighed and closed them once again. He could only hope they would leave, at this point it was like they were mocking him, just by standing there and smiling at him.

This time, they actually left just as he shut his eyes. Letting out a breath he didn't even know he was holding in, he decided to get a good rest that will make him forget about the encounter. Though a sudden beeping noise interrupted him in tracks, it was so intense it almost seemed as if it would burst his ear drums. He looked around to see what it was- his heart monitor. It was...flat lining? He was dying, or at least he thought so.

He felt a strong pang in his chest, his arm was flying up to grab at his heart. It was happening repeatedly, just the same terrible pain, leaving him wailing in despair. Though his yelling and crying didn't help out one bit, but nobody heard it. He was dying and nobody was coming to help him. He felt anger amongst all the agonizing pain, he didn't deserve to die like this. The pain had almost become too much, his eyes were closing on their own, he couldn't fight anymore. As he took in another breath, with one last cry of misery- he was gone.

Beeping. What was this? Wasn't he dead? It was the sound of beeping, though he couldn't distinguish what kind of beeping. "Jackson? Jackson? Oh doctor! Doctor he's-he's awake!" somebody announced. Yelling and even more yelling, something was happening. He could hear perfectly fine, his eyes were open in tiny slits, just enough for him to see a bright, shining light. Something was shaking him though, roughly too. It was enough for him to snap back into some sort of reality, enough for him to open his eyes fully. Just as they adapted to the glistening light, he could distinguish a mass of people in the small hospital room. Different doctors and nurses swarmed around his bed while somebody sat next to him, clutching his hand. His eyebrows scrunching as he tried to figure out the scene that was playing out before him, who was this person, no-woman next to him? Her head lifted and just as his eyes caught hers he felt relief. Jackson's mouth hung open as he took in the beautiful face of his wife, the one he hadn't seen since he had been admitted to this crazy hospital. His eyes watered as he grabbed onto her face, his weak hands caressing her soft, damp skin. He wiped her tears away, as she continued to cry rivers.

"Welcome back" one of the many doctors announced, making Jackson advert his gaze to him. "W-what do you mean?" his measly voice muttered lowly, barely audible in the crowded room. "Don’t you remember?" another one asked, his head tilted. Jackson shook his head, looking back at his soulmate next to him. She looked at him, her eyes full of hopefulness and love.

"You were in a car collision eleven years ago. You almost died today from heart failure, but your wife insisted on trying once again before we completely gave up on you.." the doctor explained with a small smile on his face." We almost lost you. But you fought through, and here you are" he finished, patting Jackson on the shoulder.

"So it was all a dream?" he asked, looking around, trying to figure out what was happening all this time.

"What was a dream?" his wife asked, placing her loving hand on his cheek. He let out a deep breath before deciding that he would let it go. "Nothing. Nothing." he smiled, gripping her hand in his.