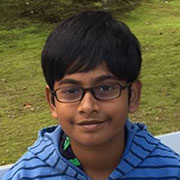 “Appearance” by Aaron Arnav Diwakar, Singapore, is the Highly Commended story in the junior category of the first biannual Short Story Contest 2018.

Alex was the new kid in the school and he stuck out like a sore thumb. Despite it being his second week only at the school, his uniform was already worn and frayed; his shoes were scuffed and unpolished. He sat at the very front of the class with a hunch that was so bad that he appeared to be half his size.

Thomas shot the boy a contemptuous look. He was well-dressed; his uniform was pressed to perfection and shoes were well-polished he could see his own reflection in them. When he had heard that there would be a new student, he had been concerned. Thomas had already established himself at the top of the hierarchy- both socially and academically. Everyone was eager to be his friend, he received numerous invites to parties and teachers always treated him special.

But a new student could change all that? What if he gets better grades than Thomas or steels all his friends? Yes, Thomas had been concerned, tossing and turning all night under silk sheets. But when he first saw Alex on his first day at the school, Thomas had laughed- partly out of relief, partly out of disbelief. This boy posed no threat to him. His uniform was appalling, his hair was done terribly and he had barely spoke to anyone; sitting alone at lunch. Thomas felt relieved. And every time a teacher called on him Alex would turn red, the words tripping over his tongue as he attempted to respond.

Alex was attempting to give a summary of the information in the chapter the class was meant to read for homework, his face turning a darker shade of red as he attempted to respond. "Um well, the chapter talked- that is I mean it didn't actually talk, books can't talk," he laughed, painfully uncomfortable. This went on until the teacher took pity on him, telling the class it was time to move on.

Thomas laughed loudly, looking around at his friends, who after a slight hesitation joined in with the laughter.

The bell rang, and as everyone packed up and left the room, Thomas made sure to deliberately bump into Alex, causing the other boy to trip and drop all his books. Alex clambered up, trying to recover all his items, with the sound of Thomas's laughter ringing in his ears.

Maths was the final class of the day and Thomas was eager for the day to end. But first, he had to get his maths test back. Thomas leant back in his chair, already picturing the 'A' that would be written on his paper in red pen, the lines of ticks that would span the pages. A dull thud shook him from his thoughts and he leant forward to see his grade.

Thomas stared at the paper in horror. Had he really received 70%? He wondered if he was dreaming, leaning forward to stare more closely at his mark. He hadn't seen a number less than 90 on his test papers in years. Thomas barely missed what the teacher was saying over the pounding of his heart and rush of blood in his ears.

"The highest mark in this test was 100%, which was achieved by none other than our own Alexander, a new but clearly very promising student."

The rest of class passed in a blur, Thomas wondering if he had slipped into some alternate dream world. Just this morning he had been so confident about his status in the school. How could Alex get the top mark? That boy looked as though he barely had enough brain cells to write his name, let alone get a 100 on the test.

When class ended Thomas made his way over to Alex, absolutely furious. He glared at him, stretching himself up to his full height so he loomed menacingly over Alex.

"Ye-yeah I did. Wh-wh-what did you get?" asked Alex tentatively.

"None of your business that's what!" Thomas snapped down at the other boy who shrunk into himself even more, thoroughly intimidated.

"Well- well if you want, I could tutor you, if you're having a hard time", offered Alex shyly. "I, I, I know maths can be a struggle for so-so-some people."

A deep, unattractive red began to make its way across Thomas' face, as his hands trembled with rage. So angry he couldn't speak he grabbed his books and stormed off, leaving a very confused Alex behind.

MORAL: APPEARANCES CAN BE DECEIVING & DON'T JUDGE A BOOK BY ITS COVER