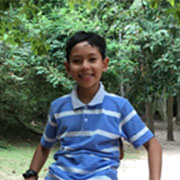 “Animaltopia” by Amir Ridzuan Bahari, Malaysia, is the Highly Commended story in the sub-junior category of the first biannual Short Story Contest 2018.

One cloudy afternoon, Stanley, a tall ten-year-old boy was walking home from school when he saw something glowing in a window of an abandoned house. Stanley looked at the window with curiosity. His heart was telling him to go in but his mind said not to. Finally, he decided to go in. He took his torchlight and opened the big doors with a loud creak.

“Hello, is anybody here?” asked the scared boy. The only sound was Stanley’s voice echoing, so he slowly turned on his torchlight and went up the stairs as quietly as possible. As he went up the stairs the doors suddenly closed. The house was pitch black. With his torchlight, Stanley got to the top of the stairs. He looked around for a light source but he saw nothing. Then suddenly, one of the rooms burst with light. Stanley had to cover his eyes from getting blinded. He walked forward and touched the light. Then almost instantly the room turned completely dark. Stanley, still unsure of what happened, was blasted through the wall and onto the road but instead of hitting the road he went right through it and fell unconscious.

Stanley woke up in a peculiar place. He looked around and saw books floating in the air, strange liquids in colourful bottles on a glass table, walls covered in green dots and a weird window. Stanley did not know where he was but one thing was for sure-this was a place he had never been to before. As Stanley was beginning to panic, a man like no other he had ever seen stepped into the room. He had the face of a lion but was standing perfectly on two feet and was wearing a suit.

“Ahhh!” screamed Stanley, preparing to jump out of the weird window.

“Who are you? Where am I? What happened at the …Wait! Am I in heaven?” asked the shocked boy.

“I’ll answer your questions, but for now follow me,” said the half-lion half-man.

“No way, I am not going anywhere with you until you tell me who you are,” said Stanley.

“Okay, my name is Mr Biscuits but you can call me Sam. I work here, in the Palace of Kings,” said the man-lion hurriedly.

“So now that I have answered your question please hurry up and follow me,” said Sam as urgent as ever.

“Okay, okay, I’m coming,” said the boy. He stood up and walked down the corridor with Sam. The corridor’s walls were covered in maroon paint and filled with men and women with a lot of different animal heads just like Sam.

“Where are you taking me?” asked Stanley.

“I am taking you to the king, Mr Brook,” said Sam.

“You are in Animaltopia,” said Sam.

“The universe is made of two dimensions, Animaltopia and your world,” said Mr Biscuits. Suddenly, Stanley stopped.

“You mean I am in a different dimension?” asked Stanley nervously.

“Okay,” said Stanley, still absorbing what Sam had said as he continued walking.

He opened the doors to a big room. On a leather chair sat a big fat beaver in a black suit.

“I’ve been waiting for you,” said Mr Brook with a smile. Stanley bowed and said “Your Highness, I can’t help but ask why you would wait for me,” asked the boy in confusion.

“Because you touched the radiumon,” said the beaver as if it was obvious.

“The radiumon is a very strong source of power, it came on the meteorite that killed the dragons,” continued the beaver.

“No, I mean dragons, but anyway legend has it that the person who touches it will have extraordinary powers,” said the Mr Brook.

“But you said that I touched the radiumon, is that right?” asked the boy excitedly.

“Wow, so does that mean I have powers?” asked Stanley, even more excited.

“Well, let’s see,” said Mr Brook. He snapped his fingers and Stanley found himself in the middle of a big stadium filled with animal-like humans. He turned around and saw a big thing charging towards him. It had sharp horns, three eyes, muscular legs, a red nose and a black mouth and body.

“Ahhhh!” screamed Stanley. He ran but hit the stadium wall right when the thing was about to hit him and he felt himself floating up. He had squeezed his eyes shut in fear, but when he opened his eyes he was in a hospital, surrounded by normal people and normal things.

“Excuse me, why am I in this hospital?” asked Stanley to a nurse.

“Oh, you’re awake. Well, someone found you unconscious in an abandoned house. It looked like you tripped and hit your head on a step of the staircase”.

Stanley was relieved that everything about Animaltopia was just a dream … or was it?