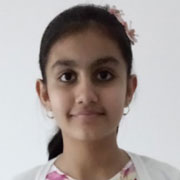 “Alice in Water-Land” by Ayushi Sonetta, UAE, is the Third Prize winning story in the junior category of the first biannual Short Story Contest 2018.

Alice was a simple school girl, staying with her parents in Goa, India. On every full-moon night, she would sit at the window and stare at the moon, wondering what would it be like to experience actually being on the moon! She was very excited to know that, in not too distant future, people will be flying back and forth from the moon. She just could not wait to grow-up and see the future with her own eyes!

It was a very important day for Alice, as she was going on a mission to a distant planet in search of fresh-water. She was working for a water-exploration company called Water Space, which used to supply fresh water to the Earth from other planets and satellites in the galaxy.

This mission mattered a lot, as her scientist colleagues had predicted a large water reservoir on this new planet called Beluga. Anticipating a large haul of water, she quickly took-off to space in her space-ship in the company of Mizaki.

It was a long journey and by the time they reached Beluga, both were drained out. Alice took a small super-food pill and went-off to sleep. Mizaki also docked itself to a solar-powered charge-pad. After a short sleep, Alice woke-up with a very loud whistling sound. As she looked out-side, there was a large sand-storm circling around the space-ship! Alice and Mizaki played chess and other games to kill time till they could venture out; however, the storm seemed to be un-ending.

Alice knew that her oxygen tank would run out in a few days and if they waited longer, she would have to return to Earth empty-handed.

Alice was not the one to give-up and decided that she will search for the water reservoir come what may. So, despite a warning from the Earth station and the bad weather, she and Mizaki set out in search of water in their space-rover. The visibility was very poor and the wind was affecting the accuracy of the tracking device. However, they bravely moved towards the reservoir site at a rather slow pace.

While they were on the last leg of the route, suddenly, the wind speed became very high and tore away the space-rover antennae! This made it increasingly difficult to find the reservoir. It was not helping as Alice was running low on oxygen! Fortunately, Mizaki had stored an off-line map in its memory to navigate under such emergencies. However, there was little which could be done about Alice’s low oxygen levels and the only hope was that the weather will improve on the way back.

They finally made it to the reservoir and to their utter surprise, it turned out to be the largest water-body ever to be found outside Earth! Mizaki quickly said, ‘Alice, you are in Water-Land!’

Their happiness was short-lived as they could not share the news with Earth station and the weather was not showing any signs of improving. On top of that, Alice was now feeling very dizzy due to the lack of oxygen in her body. She ordered Mizaki to activate her ‘hibernate’ chip and turn-around to the space-ship so that this news can be shared with the Earth Station. By the time they reached the space-ship, Alice felt that she was getting into a deep-sleep and smiled as she faintly heard Mizaki announcing on the radio, “Eureka, we found water!”

After what seemed to be a long sleep, she heard a voice, “Alice, why are you smiling in your sleep, get-up, you are getting late for school”. Alas! It was just a dream and we still had fresh water on Earth!