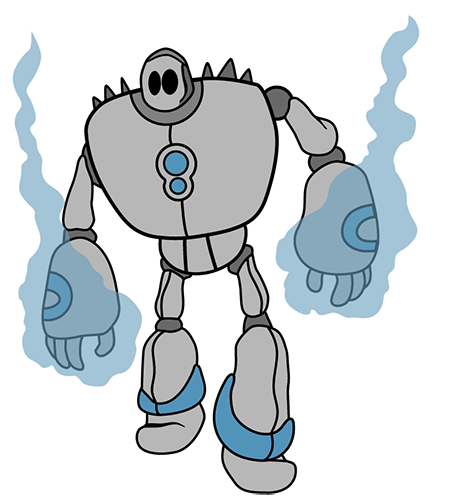 Inside a video game store, Mr. Video-Game is thinking of what new video game he should buy. He was on the 2nd floor when all of a sudden there's an odd rumble. He got down as fast as he could. When he got down, there's a huge fire. "A BOMB!!!" said Mr. Video-Game. Beep. Beep! BEEP!! BOOM!!! The bomb exploded. "What in the world!?" said Mr. Video-Game, and he immediately hopped into his car and drove to his cabin.

Then, he recalled what happened at the store. He started to worry. 2 hours later, he played Minecraft: PC Edition. He generated a survival world. Beep. Minecraft shut down. "A lot of weird stuff is happening today" said Mr. Video-game scratching his head. Then he went for a walk.

"Ha, ha, ha!" said a mysterious voice, and Mr. Video-Game heard it. "Huh?" said Mr Video-Game. He moved closer and stood behind a tree. He peeked and saw hundreds of robots, and a dark figure in the middle. The dark figure was talking to the robots. "Destructo-bots!" said the dark figure. "We have taken down Tech City, and now we must take down other video gaming cities, and the prime minister; Mr. Electro-Game!" said the dark figure. "Yes, sir Dr. Robotnic" said all the Destructo-bots at the same time. Dr. Robotnic jerked his head towards Mr. Video-Game. "Hello pedestrian, would you like your dip?" said Dr. Robotnic.