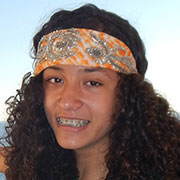 “The First Entry of an Immortal” by Talayeh Aviles, is the First Prize winning story in the senior category of the second biannual Short Story Contest 2017.

The First Entry of an Immortal

I am Orabelle, Orabelle Charity. I am indeed immortal. My mother gave birth to me inside a tiny, dilapidated hospital in the year, 1981. I bet you were expecting me to be born in the medieval times! Though I was not raised during the time of magic, I still became immortal.

It happened in the year 1999. I was living on the second floor of a corner store, or as the owner preferred to call it, a bodega. My refrigerator was looking bleak so I decided to walk downstairs and buy some snacks.

The owner, a Dominican immigrant named Bruno, looked up from the tabloid he was reading and said, “Mira! The Chica finally exits her vroom! Wha happen?”

As I browsed the shelves I replied with, “My fridge was looking hungry. Poor thing was practically begging for something!” Bruno chuckled as he went back to reading his magazine. As I browsed the racks I noticed some peculiar graffiti on the side.

“Bruno! You have some weird graffiti on the side! Ya better clean it!” Bruno had bent down from behind the counter and came back up with some wipes. He then walked towards me mumbling incoherent words, most likely Spanish profanities.

“I swear, es probably one of those kids trying to be es how you say it, gangstar!” I sighed and set my gaze towards him.

“Do you mean gangster?” He nodded his head rapidly.

“Eso es! Nice jobs! Thas how ju say it!” I shook my head at his antics and continued to search for my food.

“Orbelle can ju read it for me? Before I erase it?”

“Yeah sure. Also, my name is Or-a-belle not Or-belle.” He waved his hand dismissively and pushed me towards the graffiti. The handwriting was atrocious!

“Ummm… It says.” I squinted my eyes, “He who shall…umm. Read this! Shall gain. It gets smudged here. A power wanted. Be no, no…oh by! Half the other. Hmmm. Believes it is a. Maybe k no, no c. Aha! Curse.” I turned towards him and he looked baffled.

“Can ju please repeat?” I lowered my head and began to rub circles on my temples.

“He who shall read this shall gain a power wanted by half. The other believes it is a curse. It’s probably some comic book quote. Don’t work yourself up.” Bruno squatted down and began to wipe the shelves blemish, while I finally got to look for my food, in peace.

As I was selecting instant ramen from the variety of instant foods, my vision had started to blur. As black spots danced upon my vision, I collapsed.

My memories from here on in are fuzzy, but from what Bruno told me I fell and stopped breathing. He called an ambulance and I was rushed into the emergency room. When I came to, I was in a morgue. A stinkin morgue! I had terrified, more like petrified the poor attendant! When the attendant realized he was not hallucinating he called the police. They interviewed me ¬– more like interrogated and that was not fun.

From then on, I noticed that my hair stopped growing (my roots didn’t show), I never broke out in acne (that was extremely common for me), and I healed fast. I simply thought these were symptoms from dying. Oh, how wrong I was. Years past and I showed no sign of aging. My parents died, Bruno died, and the bodega closed.

Whenever the reason plagued my mind I’d merely placed the blame on ‘dying’. Centuries past, I still hadn’t aged. The year was now 2203. I had come to the realization that I wasn’t going to age, or die. The perks of being eternal is that you can watch technology advance. They created magic! Magic of course was a scientific serum. It gave people the ability to fly, affinity to control elements, or even transform!

I decided to purchase some. I was supposed to adapt the power to control liquids, but in the end, I could control light and dark elements. It was bizarre, since nothing had ever occurred like my case. They didn’t even create a serum for the type like mine!

With magic on the rise tensions between countries rose. Nuclear weapons were now a part of, now common, threats. People were no longer afraid of the threats, since they all believed that they were empty. Oh, how wrong they were.

The bombs fell in the year 2245. More than seventy percent of the world died, or became feral. Humanity was at its worst. Instead of rebuilding society, they all started to fight. I was often attacked, even killed a few times because of those pointless battles.

Currently it is the year 3000. I have decided to record all events of humanity. The senseless battles have ceased and the humans have begun to rebuild.

When did I stop considering myself human? Was it when I realized I wasn’t going to die? Or maybe when the humans started to refer to me as a god among man? Before I end my first entry, I wish to answer the question I started with. An immortal is someone who lives among man. They live in the shadows and observe. Never helping, never disturbing, that is an immortal.