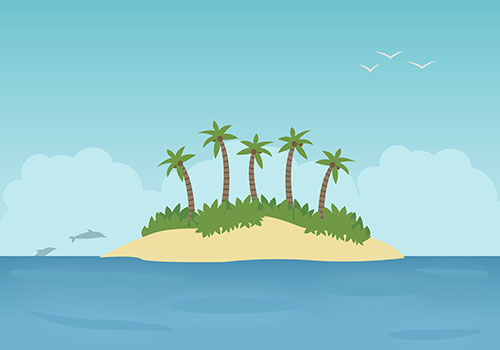 “Rosbhi Island” is one of the outstanding stories of the second biannual International Short Story Contest 2017 written by Shreyas Agrawal, India.

Once a sailor called Robin was sailing his ship but unfortunately a storm blew up. During the storm, the ship broke and was sinking. Fortunately there was an island nearby so he swam over there. Robin was all alone at the island for a month. However, Robin was living there only because there were enough fruits and vegetables. He thought a ship would rescue him. He was all alone for over two months. He found many animals as he went deeper into the jungle, including monkeys!

Afterwards he went back to the shore and spotted an enormous fish coming to the shore. It was a fish which has come to the shore so Robin rescued it. After a few days it was rainy season on the island and he decided to build a house. In the rainy season he went even deeper into the forest to look for food.

He became friends with the animals but not with the monkeys. The monkeys were in the middle part of the jungle so no animal could cross it. When he went back to the shore, he found a compass. He checked where he was. He was in the Red Sea on an island.

The next day he became friends with the leader of the monkeys and crossed the place they occupied. They called it Nominal Alcos. He soon reached the other side, but after living in the old part for almost two years. The other side was like a village with proper houses and plantations.

He visited the king and queen of the island, who were shocked to see him. The King said that somebody told them that the shore of the opposite side would get flooded in the rainy season. Robin said "Your Majesty, you can live there but we need a ship to move there". Robin also said that the jungle was full of animals and the other side of the shore was only 9 kms away. Fortunately the king and queen agreed and named the island "Robshi Island".