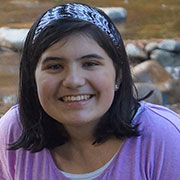 “One Step to Freedom” by Amanda Hernandez, is the Third Prize winning story in the senior category of the second biannual Short Story Contest 2017.

One Step to Freedom

Clank. Clank. Clank. That was the sound of the chains around Val’s wrists. They dug into her skin to the point of pain, but she ignored it as she looked at the man before her leading her down the hallway. Big mistake. He glared at her and yanked the chain violently, pulling her towards him making her stumble, almost losing her balance.

They pushed her into a small isolated room with a small table and a familiar machine. Val shivered from the memories. She was taken forcefully towards the machine and her struggles were futile.

“Strap her up,” said a gruff voice from across the room. Val was roughly strapped to the cool metal table by the thick leather strips that kept her from moving. Val blinked back her tears. She wasn’t supposed to feel emotions. That was why she was down here in the first place. A robot who feels emotions? Nothing like that had ever been created… until now.

Val always came up with ideas to escape, but after three years in this horrifying place, she had given up hope. She didn’t even remember life before this. “They must have wiped my memory chip,” she thought bitterly.

Val shut her eyes from the blinding light in her eyes. “Where’s the doctor?” asked a voice.

“He should be here by now,” said another, obviously annoyed. Then the door burst open.

“Sorry I’m late!” exclaimed a voice. He cleared his throat. There was a long pause.

“Yes, you got a problem with that?” he asked sharply as Val listened.

“N-no not at all,” stammered the other agent.

“Okay, well get out!” There was the sound of feet scrambling out the door and a few grumbling remarks.

“Try not to scream too much,” sneered a voice in Val’s direction before the heavy metal door closed. The blinding light above her dimmed as steps got closer and a face came into view.

Val expected to see a sneering face throwing cruel insults at her, but instead she saw a short man with a white doctor’s mask.

Val stared at him when he began doing something unexpected. He began undoing the thick bounds. Carefully but quickly, he undid the tight straps that had been keeping her from moving her just seconds before.

“Are you okay” he asked. His voice was higher than before… like a boy, not a man.

Val stared at him as she slowly sat up rubbing her wrists. He pulled down his white mask revealing a young boy around 14 smiling brightly at her. “I really found you.” He said barely audible.

Val stared at him. “You’re no doctor,”

The boy grinned. “Nope, I’m here to save you,” Val continued to stare at him. “I am Leo. My father is a doctor.” He explained.

Val flinched. So that’s why he wanted her. To run more tests? “And why does this ‘doctor’ want me?” she asked.

“Well who wouldn’t want his creation back?” he asked with a side smiled. “Dr. Turner,” where had Val heard that name before? “Created a one of a kind robot with human emotions who he treated as his own child, but she was stolen. It took us a while to track her down, but we finally did and he sent me back to find her,” he looked up. “That’s you.”

Val shook her head. “No that’s not possible…” Leo pulled out a small worn out picture of her and a young familiar man. Her eyes widened as Leo held out his other hand just as sirens began.

“Oh man, we gotta go, like now.” He said, his hand out. Val hesitantly took it and he pulled her up. He opened the door glancing both sides as the blares got louder.

“Run!” they both bolted down the hallway.

“There they are!” cried a voice behind them. They shot darts at her, but they bounced off her skin.

“There’s the exit! “Leo yelled over the sirens. A metal door stood not too far away, but as soon as they got closer, soldiers blocked the exit.

“Surrender now or we will shoot!” yelled a voice. Leo ignored him and cut a turn so sharply Val almost lost balance.

“Cover your eyes!” Leo said over his shoulder. Before Val could react, glass shattered all around them. Leo blocked the glass pieces that went flying.

They both landed on the soft grass. Leo coughed violently and Val noticed all the small shards of glass in his skin. Before she could ask if he was alright, he scrambled to his feet. “Come on!” he pulled her up and continued running.

“Hurry, we have to cross that before it closes,” Leo exclaimed. Val noticed a huge metal gate closing slowly. They burst towards it as it almost shut completely. “Go!” Leo yelled and pushed her in front of him. Val earned a mouthful of dirt as she tumbled and rolled in the grass barely making it out as the gate closed completely.

She sat up spitting out the grass and dirt from her mouth. She glanced around. “Leo?” she asked in panic.

“That was waaaaay too close,” he said as he rolled over. Leo glanced up. “Worried?” he asked.

“Wouldn’t you be if your savior almost died?” They stared at each other before the muffled voices from behind the gate began.

“Bring up the gate!”

“Almost where?” Val asked, following him up.

Leo pointed. “If we cross that river, we’ll be safe! They can’t hurt us there. My father is waiting for us.” Sure enough, past the green grassy fields and sparkling blue river, stood a blurry figure.

Leo and Val ran as fast as they could down the green hill towards the blurry person. The figure smiled brightly and reached out his hand as Val reached for him. She was almost there…just one more step to freedom!