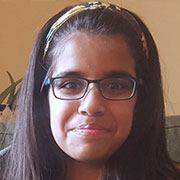 “Elsa and the Tortoise” by Mishal Faraz, is the First Prize winning story in the junior category of the second biannual Short Story Contest 2017.

Elsa and the Tortoise

Irene and Nathan lived a serene, blessed life. They had all that two young children could ask for- loving parents and they had each other! The brother and sister duo were the best of pals and they shared a great many number of interests. They were both animal lovers. What really made their life happier was the fact that they had a huge backyard and their parents allowed them to keep a multitude of pets- rabbits, ducks, hamsters, canaries, parrots, they had them all. And they had Elsa.

Elsa was a strong and majestic dog. She belonged to the Doberman breed of dogs, known for their sinewy built, strength and ferocious nature. Strong and sinewy she was, but ferocious she wasn't. Elsa was a very mild tempered dog. Irene and Nathan called her " the gentle giant" who never troubled or harmed anyone. In fact, she enjoyed the companionship of her mates. It was a common sight to see her snuggled next to the rabbits or giving the parrot a ride on her back. She loved all of them and always acted as their protective guardian.

Irene and Nathan were always bringing in new pets. One day they brought in a tortoise. For some unexplained reason, the little creature was not given a name and was just called "tortoise".

"Here everybody, meet your new friend", Nathan announced to all the backyard animals. The little tortoise peeped shyly from his shell. Elsa looked at him curiously with her huge orange eyes. Nathan kept the little fellow on the ground and went in to finish his homework.

No sooner had Nathan gone inside, Elsa came up to the tortoise excitedly. He retreated into his shell. Elsa had never seen a creature like this before. His shell reminded her of Nathan's rugby ball. And what do we do with a rugby ball? Play with it of course!! And that is exactly what Elsa did. She went back a few steps and then raced ahead and gave the shell one mighty kick. The tortoise flew high in the air, and then after a couple of somersaults, landed on the ground.

Kicking the tortoise was now Elsa's favourite sport. Whenever she would see him resting quietly, she would creep up to him and then with a powerful kick, she sent the helpless little guy flying into the air and landing on the ground with a tremendous, heart wrenching "THUD!!" More often than not, the innocent creature would get hurt on his underbelly.

Not that Elsa enjoyed hurting anyone. She just couldn't understand that the tortoise was one of the animals. His peculiar shape made her think that he was a plaything and it was fun to see him being tossed all over the place. She even ignored Irene and Nathan's reprimanding. They were always on the watch, not letting Elsa kick the tortoise around. But they could not be watching the animals all the time and that is when Elsa decided to “play”.

Hidden in his shell, not even daring to peek out, the tortoise was kicked and bruised. There was no place to hide. The colossal dog would always find him and send him into another frightening aerial ride.

Then one day, something snapped inside him. He thought-

"The huge dog is attacking me, treating me like a plaything because I am letting her! I will show her that I am stronger, braver and smarter than she imagines! I am small but I deserve respect and kindness!!"

The next morning after being kicked again by Elsa, the tortoise lay motionless in his shell. Elsa trotted up to him and bent down nudging the shell with her nose daring the tortoise to come out and face her.

The tortoise could feel Elsa's breath on his face. His heart was pounding insanely.

"It's now or never," thought the tortoise and sprung out his head from the shell and got a firm hold of Elsa's nose!!

"How could this happen??!!" thought Elsa as she snarled wildly, turning frantically in circles, trying to shake off the tortoise. But he did not let go. Hard as it was, he hung on, tightening his grip as much as he could. Elsa was writhing in pain now.

Irene and Nathan heard Elsa's whimpers and came running. The sight of the tiny creature hanging resiliently from the massive dog's nose took them by surprise. Irene took a firm grip of the tortoise and Nathan held Elsa's head. Finally, the two were separated!

Elsa buckled down in pain as the tortoise looked on, a strange proud look on his face.

From that day on, the tortoise strolled around the backyard with his head held high and Elsa watched him from a distance, never attempting to go near him.

The story of a nameless little creature who stood up against the intimidating dog, many times his strength, teaches us that we should never underestimate anyone's courage- others' or our own!!