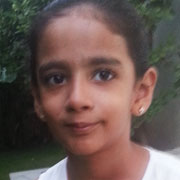 “Beyond the Horizon” by Gazala Habibi, is the First Prize winning story in the sub-junior category of the second biannual Short Story Contest 2017.

The sea looked so calm and quiet today. The setting sun was scattering its crimson colours in the azure waters making it such a beautiful and panoramic view that it would captivate anyone in its charm.

Oshima was sitting at the sea side but this enchanting site did not make her feel good and soothing. Her face was dull and gloomy. She was staring at the setting sun incessantly without an expression on her face.

But she was not an unhappy child like this always. Six months before, Oshima was a happy child who loved playing at the beach with her brother and sister. Her brother Mittsu used to make sandcastle and Oshima and her sister Osheen collected the sea shells. Her father always shouted, “Come home, it’s late”, but they would not listen. The seaside was like their second home. At house also, they were a happy family who always laughed and played and had no problems to bother for.

One day all of a sudden something terrible happened. A violent tsunami came and took the entire country in its grip. It was a huge natural calamity. Most of the houses were washed away. The cities and towns were flooded with water with the cars getting swept and massive trees uprooted. Oshima’s town was also near the sea and so the tsunami flooded her town as well. Her house was washed and they lost all their belongings.

Her grandmother Midori cried and cried and was totally devastated. She has not seen such destruction in her whole life. They were homeless. Oshima wept and wept and complained to God that why did God make a violent tsunami hit her city. She was very angry with God.

The government shifted them to a refugee camp where many families shared the living space. Helicopters dropped food packets and they had to stand in long queues even for drinking water. Their life had turned upside down. Oshima could see the sadness visible in her parent’s eyes. Now she did not like the sea at all and always felt that the sea had broken her trust and was very disappointed with the waves. For her the sea was very cruel who had snatched her beautiful house away.

One day while she was in the camp she saw two little children playing and they seemed calm and composed without any trace of sadness on their face. Oshima started playing with them and while talking the kids told that they had lost their entire family in the calamity. The kids said, “We used to cry a lot but now we have stopped complaining and try to be happy for whatever we are left with.” Oshima was deeply saddened hearing this and also shocked. She had never thought that there might also be children who had lost their loved ones at a very young age. She became silent. She thought that she had her family by her side which was indeed the most important thing for her. She had never thought of that before. A new ray of hope filled her spirits making her believe in the mercy and power of God. She wholeheartedly thanked the Almighty for keeping them safe and hearty. Oshima had learnt a new meaning of satisfaction and the small children taught her a very big lesson in a child’s play.

The setting sun was looking so beautiful throwing a new light beyond the horizon throwing the shiny rays on the magnificent sea. Oshima’s was viewing the sea with a changed perspective at the moment and she was now no more a teary eyed but a grateful soul now.